I’m very impressed with odrive. So much so I gave up Carbonite after like 7 years in favor of odrive Pro/Amazon Unlimited.

That said, there’s one feature I desperately need: Sync scheduling.

Throttling is great but it doesn’t go far enough. I’m talking during off-hours odrive is completely idle. That means:

This is one thing that Carbonite has that I really, really appreciate and is sorely lacking in odrive.

Great job! I hope you’ll implement this and make it the perfect solution for me!

Thanks for the suggestion.

It would be possible to simulate this with an automated task to shutdown odrive and start it again when you wanted. Not as elegant as a built-in feature, but it may work for your purposes. I can elaborate if there is interest.

I would like this too @Tony! Some times i’m syncing a lot of files and odrive does have an impact on my Mac performance and my internet gets slow even with bandwidth throttling. Make this for us!!

Now that I’ve upload 800 GB to my Amazon Cloud account (thank you odrive!), I’m ready to slow things down.

I’ve created a Task Scheduler task that should do what I’m asking. I wanted to run it by you, Tony, to make sure this will work.

I have the task set to run at 11 PM and kill the odrive.exe 8 hours later. 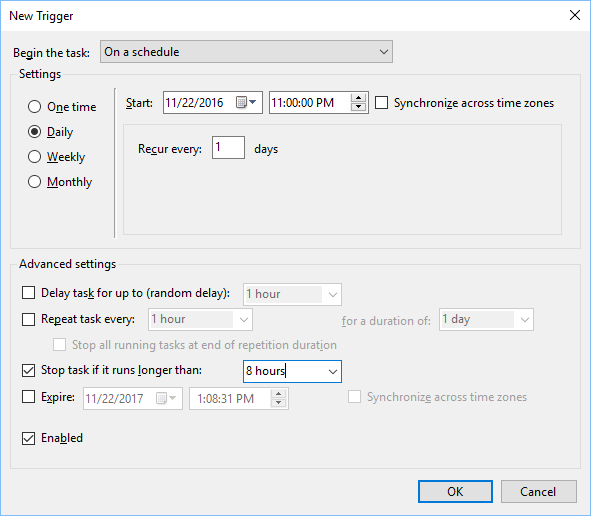 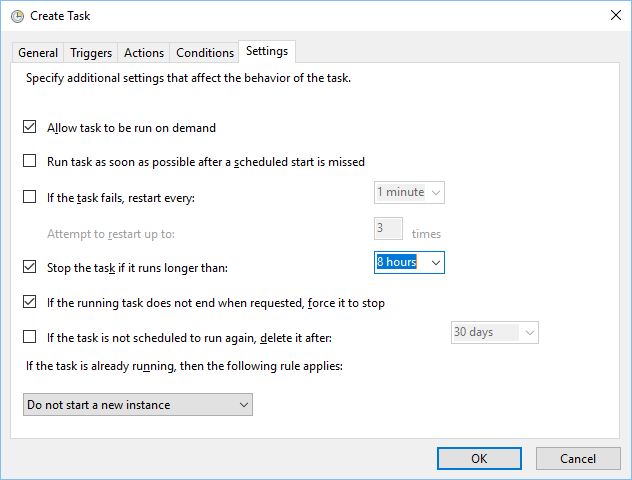 Hi @jeff.lawlor,
If you want to programmatically shutdown odrive, I would suggest using the CLI to do so. With the CLI you can issue the “shutdown” command, which will shut things down gracefully. Just let me know if you have any questions about this.

In Windows, that says to me that I’m running 2 Scheduled Tasks.

First Scheduled Task: Run c:\Program Files\odrive.exe without any parameters at a triggered time. In my case, run odrive at 11 PM. Don’t “stop the task”, no matter how long it runs.

Second Scheduled Task: Shut down the exe started in the previous task:

Download the python, CLI interface of odrive. The .exe in the .zip file is, confusingly, called odrive.exe. This is not the same odrive.exe that you see running in Task Manager. Instead, this is a python-strapped command line interface (CLI) version also called odrive.exe. I saved it as “odriveCLI.exe” in “c:\program files\odrive” to avoid confusion.

The “Action” tab should have c:\Program Files\odriveCLI.exe" as the “Program/Script/” The “Add Arguments” field should say “shutdown.”

The Trigger tab should set a time to shutdown odrive. In my case, 7 AM. 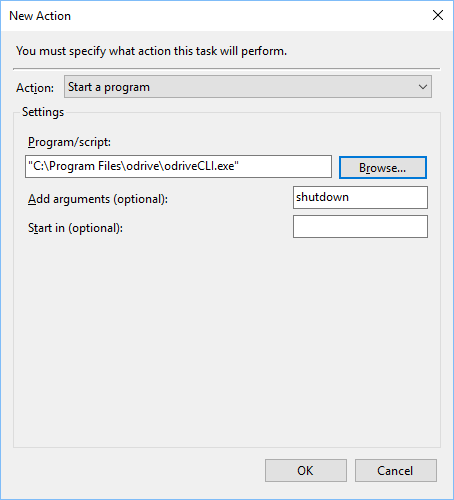 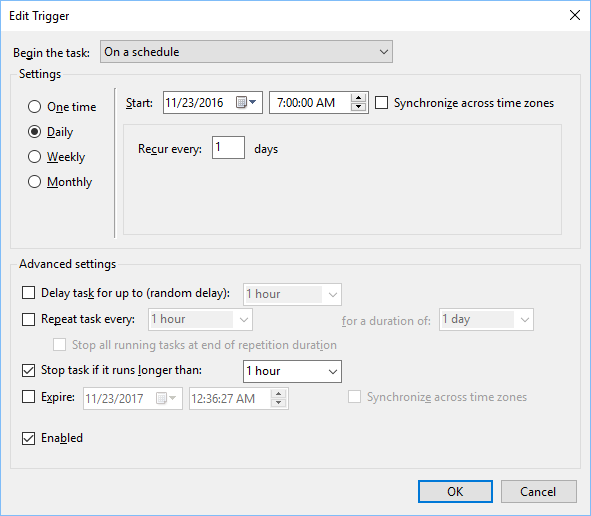 Suggestion: Make odriveCLI.exe part of the Windows download/install package. It’s 13 additional megabytes, sure. But it will help adoption and keep the CLI local and uniquely named.

This worked perfectly!!! Thanks so much! We have several TB going into Google Storage Cloud (per this article: http://blog.odrive.com/blog/2016/4/29/is-your-cloud-storage-slow-as-shit) and it puts a huge load on our server during the initial sync/backup.

Hi. We are considering Odrive.
To clarify one issue.
Will The above proceure to sync via schedular work while logged off server?
Or do a user need to stay logged on for this to work

odrive needs a profile to install to since it has a local persistence layer that keeps the configs and sync information, so you would need to run it as a user that has a profile and has access to their user registry settings.