I’d like to see a parameter to the CLI shutdown option that waits for all uploads to complete before shutting down.

I’m running odrive only 8 hours per day and we know that Amazon doesn’t support file resume. I’m often uploading files as large as 12 GB to Amazon Cloud, meaning a lot of unuploadable files and a lot of wasted bandwidth.

I appreciate the Infinite File Upload solution to this problem but what I really need are the files fully intact on Amazon Cloud. Since these are MP4 files, I’m able to view them directly from the cloud- provided they are not broken up into smaller chunks.

As a compromise, I’m willing to let the pending uploads go to completion and then shut down odrive for the day when issuing the odrive shutdown command. It may run several more hours but at least I’m getting the files up there fully intact and no more wasted bandwidth for abandoned uploads.

I hope you’ll consider this. It would make a huge difference for me.

Hi @jeff.lawlor,
This is not going to be perfect, but it may help. Currently odrive should usually upload only 1 file at a time if the file is greater than 100MB. With that in mind here is a quick script I wrote up that will defer exiting odrive if there are any files uploading greater than a set threshold (5% in this example).

You can put this into a .ps1 script and run it instead of your current “shutdown” call.

Thanks Tony. That looks like exactly what I need. I’ll give it a try in the next week or so.

I’m not quite clear on what you mean by upload threshold, though. What is it a percentage of?

It is the percent complete for a particular file. I left some wiggle room so we are less likely to miss the window.

Thanks for the custom solution.

I’ve been experimenting with the shutdown script. It does work when the circumstances are right. Unfortunately, a couple of issues preventing those ideal circumstances.

Second, sometimes the item it’s uploading is a folder, not a file. In the screenshot, “Cosmos” is an entire directory. Some of my directories are hundreds of gigabytes.

Under controlled circumstances, the script works great. But with the above issues, odrive is never shutting down under practical circumstances.

Any ideas on getting past these issues? 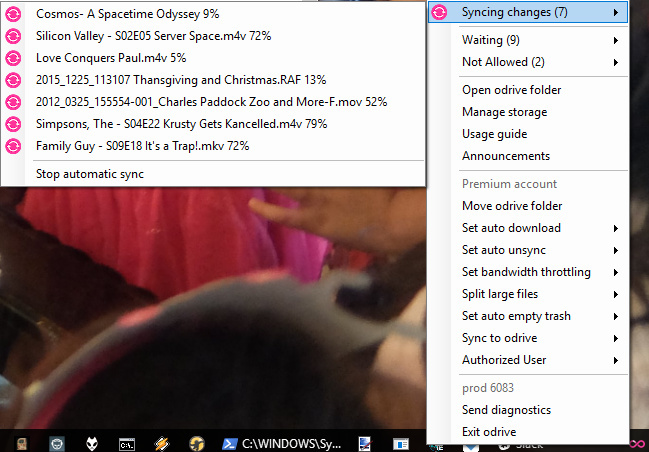 Hi @jeff.lawlor,
When you run the script under those circumstances are you seeing that it is detecting several files that are uploading and past the 5% threshold?

Currently odrive can have some issues syncing one large file at a time. It depends on the folder structure and on user activity. Our next major version will be fixing this so that it will always respect limits. For the files you are seeing uploading, how distributed are they across your folder structure?

When you run the script under those circumstances are you seeing that it is detecting several files that are uploading and past the 5% threshold?

Yes, that’s exactly what’s happening. In fact, I just made the script dump the status --uploads output and this is what I got. That’s a lot of simultaneous uploads!

For the files you are seeing uploading, how distributed are they across your folder structure?

I have probably 12 root folders. In this sample, it’s clearly fixated on the “TV” root and the “Friends” folder within it in particular. However, there are several files from different folders in the TV root and a couple more files from entirely different roots.

There are at least 3 files that are over 100MB but most of those files are under, if that helps.

Is there a way to limit the overall number of simultaneous uploads?

I did fix what looked like a bug in the script- the check for $can_exit seems to belong after the foreach loop. Otherwise, it exits when it encounters an individual file is less than 15% uploaded, irregardless of the upload state of the remaining files.

I pasted the version I’m running. It has the bug fix, a lot more output to the screen and a configurable interval.

Yup, you are right, the shutdown should be after the foreach.

For now you may just need to make the threshold looser if stopping is more important than finishing uploads in progress.

How fast is your upload?

Yes, you’re right- that long list of files was within an hour of starting odrive. Here’s what it looks like after running more than a day. Quite a few less.

I have the threshold set to 15% but there’s still little chance all of these uploads will be below 15% at any given run of the script.

Making it less likely is that I had to increase the delay to 5 minutes. When my PC is under load (which is most of the time), it takes 30 seconds or longer to complete the script.

I’m looking forward to that next release. I’m happy to beta test it.

Thanks for the feedback @jeff.lawlor. I appreciate the details. I would expect the number of uploads to dwindle as time goes on, but it may not help all that much if it takes longer than a day to do that.