I use iMovie’s library to organize my video media. Up until yesterday I had no issue syncing with odrive and Amazon drive.

Now my iMovie library files keep syncing over and over. Files are not new and already uploaded to Amazon Drive.

Why would the files keep trying to sync?

The only thing I did to trigger this was I opened iMovie. Now odrive is trying to sync all files again.

Hi @roachapproach
Can you tell me which files are being uploaded? It may help to submit a diagnostic (from the odrive tray menu) so we can take a look.

Apple products tend to have some pretty extensive directory structures and multiple databases they use. The databases, in particular, can be quite large and will generally be modified whenever the app is opened.

@Tony It seems like it’s trying to upload the entire library even video files. Here is some random files it keeps repeating. 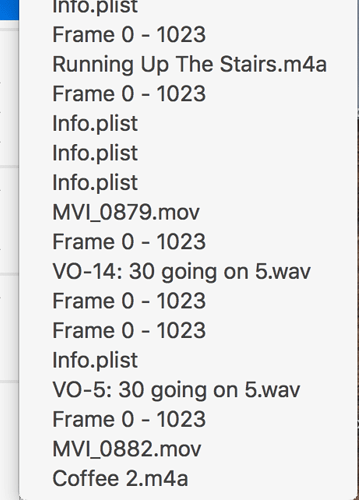 Note I have 4-5 different iMovie library’s. It’s trying to sync files on all library’s.

I took a look and I see that all of the active files are inside “.fcpcache” directories. They looks strangely nested, with multiple instances of the .fcpcache folder within the same hierarchy as if they are self-referencing aliases/symlinks.

From the diagnostic, every actively syncing path is similar, where there are multiple .fcpcache folders in a nested structure, starting with …imovielibrary/.fcpcache/

I was poking around a bit and this seems to be an issue encountered elsewhere. I don’t have an iMovie library to verify, but some reports say that the .fcpcache folders point back to their parents, in some cases, which would create an infinite loop.

I haven’t done enough research to know if removing these cache folders is an option, but I anticipate that, if you did, this issue would go away.

Thank you for all the help!

I’ve managed to delete most of the files causing this issue. Now I’m down to no longer syncing files over and over. I still have a problem with odrive trying to check the same folder over and over though. I’ll send another report.

I got this prompt: 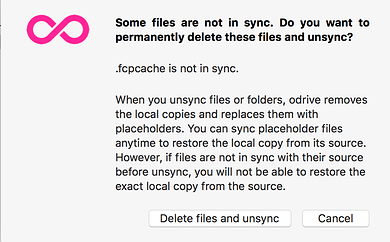 This deleted all the files effecting my continuous sync issue.

I saw that. Awesome! Thanks for the quick fix!

I use FCPX and we have been doing a lot of archiving, have been encountering issues with folders inside of .fcpcache. I have attached a screenshot so you can see. 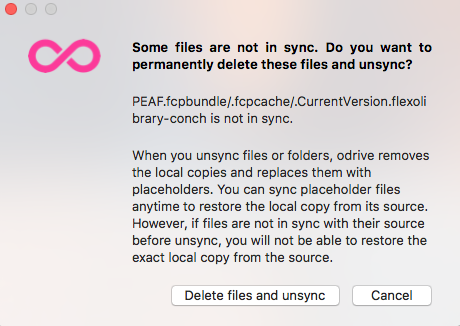 So perhaps we need to add * to the end of the blacklist file?

Hi @stirstudiosdesign,
This is currently a oversight in the unsync functionality, but it will be addressed in our next major release. It is still several weeks out, however.

In the meantime you can remove the .fcpcache folders manually.

Or, unsync the fcpcache folders at a lower level (right-click->unsync on the PEAF.fcpbundle folder, for example) and confirm that the files can be deleted and unsynced. Since these are just cache files, there is no harm in having them deleted without being synced to the cloud. Unsyncing at the lower level folder will focus the unsync (and delete of blacklisted items), so as not to hide any other files that may not have synced yet that you want to go to the cloud.

Interesting workaround for now! What I was doing was zipping up the library, but was not thrilled with the option. Looking forward to the new release! Is a great app and makes a big difference in our backups!