Every time after starting my computer all my synced folders are marked [invalid] in the odrive-popup.

When I click on each folder in the popup the folder opens and odrive seems to start working. From this time on the folder is not marked [invalid] anymore but I have to open each folder first.

I guess this is not the proposed behavior.

Thanks for your assistance

Hi,
Are these folders on a mapped volume (instead of being local tot he internal hard drive)? If so, you may be hitting a race condition, where odrive starts, tries to find those folders, but they don’t exist yet because they haven’t finished mounting. Once you click on the in the tray menu, odrive looks for them again. If they exist, all is good.

The Folders are all on my second internal SATA-Drive. Parts of my user profile are also on that drive. A race condition seems very unlikely.

Thanks for taking care.

Hi @hpg,
I agree that a physically connected drive should not be affected by this. We mark a folder as invalid if it can’t be accessed at the time we try to access it. One of the first times we try is when odrive starts up.

Can you try reproducing this and then send a diagnostic from the odrive tray menu? I will see if there is possibly something else at work here.

I will reproduce tonight and send you the diagnostics.

I sent the diagnostics.

After sending them I tried “stop sync” and later “start sync”. This does not change anything. odrive does not start syncing. Only when I click on one of the [invalid] folders odrive starts activity.

A quick update. After sending you the diagnostics I had a strange behavoir. I was not able to open folders over the odrive popup anymore. I decided to restart the PC.
I dont know why but since then I do not get [invalid] folders anymore and odrive starts to sync right away. I made several restarts and everything still fine. It seems the diagnostic fixed something.

Thanks for your help.

I’m glad its working. Taking a look at the diagnostic it was actually OneDrive telling us that the remote folder did not exist, which is very strange. I am wondering if it could’ve been a race condition on their end with regards the the user session. I can’t say for certain, but let me know if it comes back.

You are right, the diagnostics are strange. I deactivated OneDrive, so that should not happen at all. Also OneDrive was never configured for those folders. I created them for the work with odrive after deactivating OneDrive.

I’m afraid this issue is back. I had it several times over the weekend. But it seems not exactly same. Now when I get the [invalid] Folders a restart seems to fix it.
Once I had a Problem that a file was rejected. When I clicked on it odrive told me that OneDrive was not ready to write it.Could it be that this is the same Problem with the [invalid] Folders? Maybe odrive is not able to sign on to OneDrive in a reasonable time?

Hi Can you send another diagnostic when you see this next? It is possible it is a session timing issue.

I just sent another diagnostics.
After starting odrive-icon shows a short activity. After that it only starts to sync again when I open one of the folders.

Thanks for your help.

Hi,
This does not happen on a quick restart of odrive after the mounts are back to working order, right?

I never tried to just restart odrive. I always restarted the whole system. I can try that when it happens next time.
Lately a restart fixed the issue as far as I remember, but in the beginning I know a restart did not change anything.

Another thing I noticed lately is that a click on the folders in the odrive menu does not open the folders after I had the [invalid] problem. This happend more than once now but I’m not sure it happens every time.

Hi,
I was hoping you could restart odrive right now, just to make sure that you aren’t seeing the folder marked as invalid once it comes back up.

It sounds like this happens more often if odrive is not running for a while, and then is started again. I just wanted to verify this.

I’m sorry I could not react right away. Im using odrive at home and can only access it on the web while in office. Furthermore I’m living in Europe so we have some quite different time zones.

Odrive is automaticaly started together with my system. I do not stop it while using the system.

Thanks for the additional info. I’m trying to reproduce this…

We just pushed out a new desktop client version. Can you see if the problem is still visible on this new version? I am unable to reproduce this so far, but I’m running against the latest version.

This release primarily contains a bug fix for Windows users with unicode characters in their OS user name (what appears when you go to C:\Users\USERNAME) Win v.5659 / Mac v.5689: For users with Latin character sets (ISO-8859-1) in their name, we inadvertently introduced this issue on our 08-23-2016 release. That build was not pushed to autoupdater, so only new users from the past couple of days were affected. This build fixes the initialization / start-up problem. Users with Asian and othe…

I installed the new client just after I worte my last message. So far I could not reproduce the issue with the new client. I will have an eye on it over the next few days. 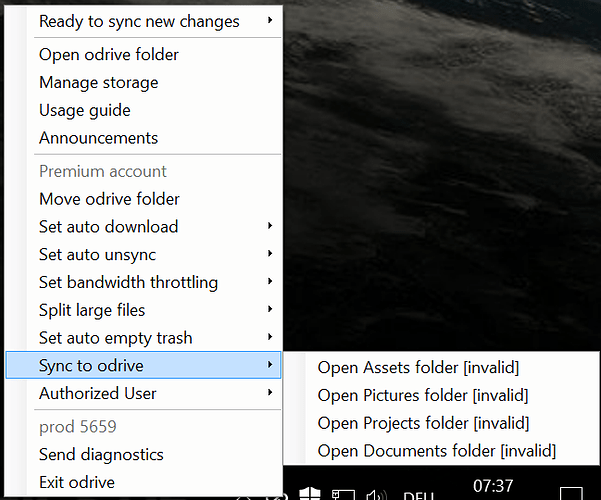 I sent you a new diagnostic.