How to Find Odrive agent version and how to update it?

Hello
When asking the status of my agent on our server, I receive the below information
How to find agent version?
How to update an agent to latest version?

odrive Make Cloud Storage THE WAY IT SHOULD BE.

Re-reading what I wrote

Is this the version?
syncEnabled: True version: prod 858

What is the latest version available and how to update it?

Hi @administrator2,
We are planning on a new agent release in the next several days. Take a look at this post here for information on updating to the latest release:

Update Sync Agent and CLI Releases I Have a Question

Hi @phm1, For an agent upgrade you just need to overwrite the existing binaries for agent and CLI. You can download them from here: https://docs.odrive.com/docs/odrive-sync-agent#download-sync-agent If you used the install instructions from the documentation, the binaries will be in $HOME\.odrive-agent\bin, where $HOME is your user profile directory.

Thanks for the answer. I will update, but …
Could you please let me know how to reset odriveagent mounted folders? I prefer not to relaunch the odriveagent directly because I met the following problem

Recently I installed (and replaced odrive) on users computer Google File Stream on company users’ PC. I then added shortcut in their GDrive pointing to the 3 above mentioned shared folders.

And this morning about 11:00 am, MAJOR PROBLEM, the main folder MyDrive/Server disappeared, and all users called me saying that google file stream where not giving anymore access to the shortcut of the shared COMMON nor the ARCHIVES nor the USERS.

Indeed MyDrive/Server disappered from Administrator Google Drive.
Any clue? odriveagent looks like being corrupted with its DB …
What is really confusing is the fact that files started to appear in the root of the administrator google drive folder. How that can happen as nothing is mounted at that root level?

Thanks for your help

Hi @administrator2,
I’m not sure I am following the whole setup and scenario, so let’s step through a couple at a time.

The behavior you are mentioning is definitely unexpected for odrive. odrive doesn’t actually have the ability to remotely delete anything unless it is inside of an odrive mount. It doesn’t sounds like this is the case with your configuration since the mounts were all created with folders that are inside “MyDrive/Server”. Correct? Even when odrive detects a local delete, it will hold that in the odrive trash until it is emptied. 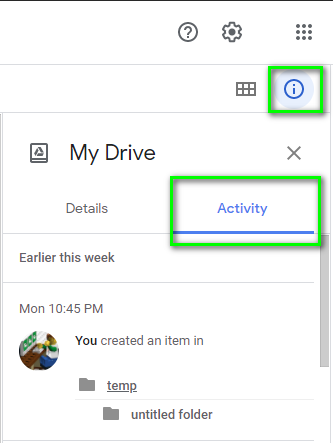 How that can happen as nothing is mounted at that root level?

The odrive client shouldn’t have access to the root if it is not accessible via a mount. Does the activity on at the root of the Google Drive show these files being added? Does it show what or who added them?