Hi, ever since I installed odrive I’ve been experiencing high CPU usage by odrive. Seems to get worse every 15 minutes (system tray icon turns pink for no reason) before calming back down 1-2 minutes later. I don’t know why it acts up like this, especially when idle and nothing is syncing, but it’s very annoying and heats up my laptop… makes it noisy too

I tried shutting off the automatic sync, but it doesn’t appear to help anything. Only way to stop it is to close the app altogether.

When it acts up, task manager shows this 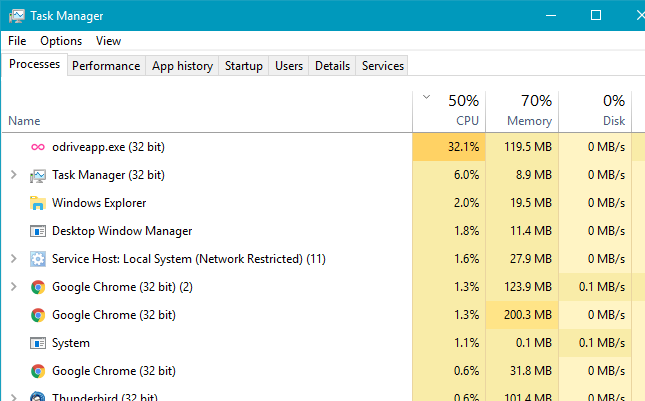 Hi @Dubs,
odrive performs some periodic scanning, which can elevate CPU for a short time. I wouldn’t expect it to ramp up CPU every 15 minutes, though. Can you send a diagnostic from the odrive tray menu the next time you see it ramp up so I can take a look? If you can provide the time you saw it start and then send the diagnostic after it dies down, that would work best.

We are improving CPU overhead in our next major release, so that these periods are less impactful, in general.

What information is recorded in the diagnostics? For privacy sake, I’d rather see the information first. Before discovering odrive, I had used Mountain Duck, and needed some troubleshooting help from the developer. They wanted me to send a similar diagnostics text file, but I looked inside first, and found that it had recorded various filenames and folder structures of my cloud. I was not happy by this revelation, to say the least.

I have tested the cooldowns and rise in cpu usage. There is a cooldown period close to 15 minutes, before acting up for about 2 minutes and 40 seconds, then repeats (cooldown, then rise).

Hi @Dubs,
The diagnostic report mostly shows the odrive sync decisions that were made within a small window of time. It shows paths of the files that were synced or were attempted to be synced and the outcomes of those attempts.

Unfortunately, without that information the diagnostic wouldn’t be very useful. I understand you are not comfortable sending the diagnostic.

In lieu of a diagnostic, can you tell me:

A large part of our current development towards improving efficiency of the system at scale. Our next major release should address a lot of these periodic spikes that some folks see.

How does knowing the exact filename/foldername/structure of users’ cloud files ‘help’ with diagnostics? These sensitive characters should be replaced with random alphanumerics, asterisks, or withheld altogether. The only reasonable bit of info might be file type, if that. 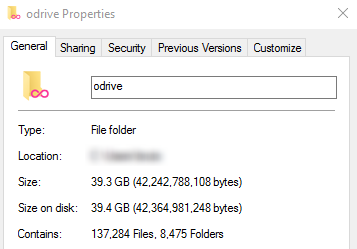 By the way, is there an ETA for the next release?

Hi @Dubs,
Thanks for the screenshot. Can you also tell me how many links you have within odrive and what types they are?

How does knowing the exact filename/foldername/structure of users’ cloud files ‘help’ with diagnostics?

It actually helps in a number of ways:

By the way, is there an ETA for the next release?

I am shying away from giving estimates because the ones I have given previously were wrong. We wanted to have this release out already, but we have ended up doing a lot of work on the internals of the sync engine than initially expected. This will allow us to build and refine much quicker than we were able to before, but it has extended the duration of development. I can say that it is the top priority and is being worked on around-the-clock.

Unfortunately this type of work is time consuming, but its an investment in the future.

The storage accounts you have linked to odrive. Like Dropbox, OneDrive, Amazon Drive, etc…

It sounds like scanning, although I would expect 30-60 minutes between, rather than 15. In any case, this type of CPU heat is specifically being targeted in our current development.

Updated to 1.0.6207 a couple days ago, am still experiencing the fluctuation in high cpu usage. Just thought I’d throw that out there.

Thanks @Dubs. The last release was just a few bug fixes and not the major one referenced above.

Today's desktop sync client release has some minor bug fixes: Win-6207 / Mac-6271 * Fixed: Linefeed character \n is an illegal character in Windows now. * Fixed: FTP max connections detection was off by 1. * New: Increased default timeout when calling our server to allow for slightly longer call response time. * Other minor bug fixes This build is available from the main download page in our documentation. We'll push this build to the autoupdater in a few days. Thanks, -Jeff

Any updates? I have the same issue with high CPU

Hi @odriveuser,
We will definitely make an announcement (probably several) when the new version arrives.

I can barely manage my files through Windows explorer due to the CPU spikes. I have to right click > sync or move files and quickly close Explorer until the sync finishes. It’s quite awful.

Hi @tmfields21,
Take a look at this user suggestion, it may help to smooth things out: Decrease CPU priority so ODrive doesn't interfere with other processes