Folder sync is not working. I need to sync individual files...not fun

From the directions, it seems I should be able to select sync and then check that I want to sync subfolders. That is not working. I need to sync each file individually.

I’m on MacOS syncing with Google Drive and Dropbox.

Hi @Chris5,
When you right-click on a folder, do you see the “sync” option? 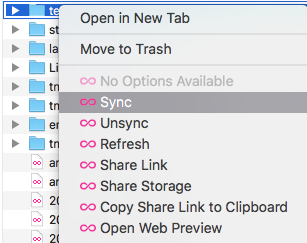 If so, are you seeing this dialog pop-up?

Selecting the options I have above and clicking on the big silver button will start a recursive sync process from the selected folder, down.

Thank you for trying to help, but as I said in my post - That is exactly what I’ve been trying and, it’s not working.

@Chris5,
Can you tell me where you are getting to and what is happening? Are you seeing that dialog, clicking the button, and then nothing happens?

If so, can you perform the task again and then send a diagnostic from the odrive tray menu a couple of minutes later?

Same problem here!
Every time I click in the big silver button, odrive syncs one or two files then I have to repeat the process.
The problem often occurs with files generated by Dropbox to resolve conflicts.

If I try to sync one of these files individually I get this message: “This file doesn’t exist.”

Can you send a diagnostic from the odrive tray menu and tell me what file path you hit this issue on please?

I’ve sent.
One of the problematics files can be found at: /Users/guilherme/odrive/Dropbox/Livros/Outros/RR71 0 Ruby on Rails Caelum (Cópia em conflito de Rui Cosenza 2015-03-27).pdf

Just one observation: I’ve already synced all files now forcing many times the sync clicking in the big silver button…

Hi,
I see an issue that may still exist with this folder: Dropbox/Livros/Finanças

The problem seems to be that Finanças was renamed from using a c-cedilla (ç) to a c+combining cedilla (◌̧). I don’t understand the nuances of these unicode characters, but it looks like Dropbox is not allowing the rename as it thinks its the same character. You can try to rename this with by replacing ç with c to see if that addresses it, if this is still an issue.

I’ve noticed that Dropbox has some peculiarities with renames of folders if the the rename only consists of capitalization differences or, as it seems in this case, alternate unicode versions of the same character.

It sounds like you’ve already resolved your issue, but you may want to take a look at that folder and make sure it looks okay.

Thank you for analysing the problem.
The folder Livros is a shared folder and because of this I don’t want to rename it.
Now that I received your reply I see that from time to time odrive tries to sync the “Finanças” and “Casa do Código” folders but they are already in my local folder. I don’t know if it helps but I’m on a Mac and I didn’t rename anything. I just want to download from cloud.

A similar problem seems to occur with Google Drive’s shared folder (“Shared with Me.cloudf”). I had to unsync this folder to resolve the problem.

Is there any place with these particularities of each cloud provider?

I am using de CLI client on a Raspberry Pi too. I don’t know if it’s related with this problem but after each time the command bellow runs some files don’t get synced:

If I try to sync individually a file or folder I get this message: “name_of_folder.cloudf. Busy - try again later”. I am trying to sync with Onedrive.

Hi @guilherme_filgueiras,
Unfortunately I can’t see enough to determine why the name discrepancy is happening. You should also be able to resolve it by unsyncing the Dropbox/Livros/ folder and then trying the syncing again.

For the Pi sync issue, you may just want to “loop until done” on that folder structure, as you could be hitting API rate limits or some other intermittent exception on some files during sync.

I’ve also had this problem while syncing my research papers. It always seems to be related to file and folder names that include accents. If you need it to sync you can simply move or delete the local files and it syncs the rest of the folder, but that’s obviously not a long term solution.

Hi @talbot.a.r,
Are you also seeing this with Dropbox? If you see the issue again, can you ping this thread and send a diagnostic from the odrive tray menu so I can take a look?

Yes, this is with Dropbox. I’m running macOS, I have some PDFs on dropbox that odrive was syncing to my laptop. It failed to sync the ones with accents and such in the filenames. Moving them to a non-synced folder, then putting them back in the odrive folder and allowing odrive to sync the files back to dropbox seems to work fine. I’ll try and recreate the issue when I get a chance.

Can’t seem to recreate the issue currently. Uploading to dropbox and usign odrive to sync “down” to the laptop doesn’t seem to cause it.

I appreciate the update. Just ping this thread if you see a reoccurrence.

I just wanted to ping this thread with an update. We found a bug with handling unicode characters that could’ve been causing some of the issues reported here. This has been fixed in our latest version:

I have the same problem.
I can exclude:

In fact I have to sync every subfolder on its own, and I would expect a WORKING promised feature for the 99$.
But this is not the only bug. Some folders that are completely “blue” can sometimes not be unsynced as odrive says it would delete unsynced files. If there is no consistency, on what should I rely? Is it synced, or is it not? To monitor this via web or apps would be… heavy…

Just read about 6103 for mac… will try it.
In any way I would like to have a statement, Tony. Thx!

I played around with some of the files that aren’t syncing for me and it seems like (at least for Amazon CloudDrive) that it doesn’t sync files and folders after the fourth subfolder.
(Mac v.6103)

We are currently working on improve the overall user feedback to better represent the various states of sync. In addition, we are improving odive’s tolerance for exceptions and intermittent issues when performing bulk operations, like a recursive sync-all.

For the “sync all” issues you are seeing, are you getting any pop-ups with exceptions, or does it seem to be giving up silently? Can you reproduce the issue a couple of times and then send a diagnostic from the odrive tray menu please?