2 of my linked accounts are reporting errors when trying to sync. They proceed for a while and download some files, then I get an error:

For the amazon cloud drive: “Unexpected”

In both cases, it does not tell me what the illegal file name is (so I can go and rename it) 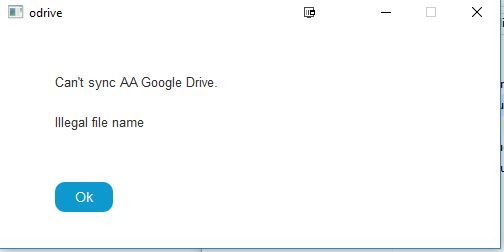 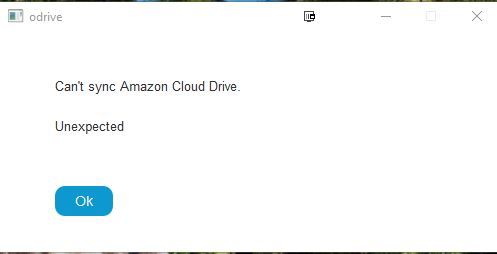 The above are the errors. I have also submitted diagnostics just now.

Hi @alia.alkasimi,
I see a few issues in the diagnostic.

The first is that there seems to be a problem that odrive is having with setting attributes on the files. It looks like odrive is on drive E:.
Is it an external drive or some sort?
Can you right-click->properties on the E drive and take a picture of the screen that pops up for me please?

I see a couple of the illegal character issues too:

yes, e: is an external drive. 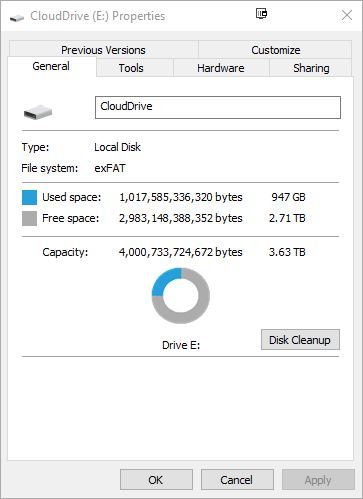 I am using a external drive as i need to share between 2 computers.

I renamed the 2 examples that you mentioned and tried to sync again. I just got the message:
“Can’t sync AA Google Drive
Unexpected”

message. Is it possible to see the error messages from a diagnostics file so if it is something like bad file names I can rename them online and try again?

Hi @alia.alkasimi,
I think the errors you are seeing currently are due to a specific issue with certain files that have either an unset modification date, or one that is set to ‘0’ in combination with your FAT-formatted drive. You should be able to see these files in the waiting list in the odrive tray menu.

I am not sure why these files have this date problem, but you may be able to see by looking at them within the Google Drive web client. What does the last modified time say on those items?

Additionally, we do not actually officially support moving the odrive folder to an external drive, and have not tested odrive working against an exfat file system. This means you are running in an “unsupported” state, currently, although I would like to help you through this particular issue.

I also wanted to mention that there appear to be a lot of items in the odrive trash. Is this expected? They appear to mostly be in Amazon Cloud Drive/Pictures/Archived Music/. It possible this is from a move attempt?

I wonder if there is a way to change the last modified date on google web client. You feel these issues will go away?

I use exFat because that is the only file system that can be shared for read/write between my desktop (win 10) and laptop (macbook pro). Is your implementation file system dependent?

My goal in using the exFAT external drive was to download all the files on my windows desktop (connected to gige ethernet ISP) and then use the external drive with my macbook pro (which only has a wireless network connection, besides not having enough internal storage to keep the entire ~2TB worth of files). My plan was to install odrive on both machines and share this drive. Can 2 machines use the same files linked to the same odrive account (the external drive would be either connected to windows or to Mac at any given time, but I am hoping both odrive installations can work with the external drive and adapt to changes in the files when on the other machine).

Lastly, the items in the trash: From one of the forum posts, I saw that if I already have the downloaded files in a different directory I could copy them into the odrive folder and it would not redownload them again. I thought the .cloudf and the original file/folder cannot both exist, so I deleted all the cloudf files recursively. Odrive did recognize the files but there were about 500 files/folders that I did not have already downloaded. They are now sitting in the trash and I think that if I sync deletes, then they will also get deleted from the cloud (which I don’t want). Is there a way I can mass “recover” without clicking at the 500 files one by one?

Thanks a lot for your prompt response!!

Hi @alia.alkasimi,
Sharing the same exact structure across two instances of odrive (your Windows desktop and your Mac, for example), is not something we recommend or test. The main issue is that one odrive may see new placeholder files that are “foreign” to it, since they were created by the other instance. odrive should be able to deal with this, replace them with its own, and continue on but, again, its not something we can test or support.

Similarly, I wanted to reiterate that we also don’t test or support placing the whole odrive folder on a external drive, as stated here: https://docs.odrive.com/docs#section--move-odrive-folder-to-another-volume-. It is something that may work, but can possibly cause some complications. For example, it can create issues with reflection/pick-up of changes, permissions, CPU heat, disk churn, inaccurate scans, user feedback lag, and other problems.

Our “sync to odrive” feature allows you to sync specific areas on external volumes without needing to move the entire odrive folder to an external volume. Have you tried that feature yet? https://www.odrive.com/usageguide#syncexternalfolders

For the timestamp issues, if you are able to adjust the time on these files that were made back in the 70’s ;), I expect it to clear up the problem you are having.

Currently there isn’t a way to perform a mass trash recovery, bu if you recover a folder in the trash that contains a bunch of trashed files, it will recover the files within it, automatically.

Additionally, you can simulate a mass recovery if you unsync the parent folder of the items in the trash. Unsync of a folder will discard any pending deletes inside, which will remove them from the trash. Re-syncing that folder will show you the files/folders again.

Sorry to resurrect a REALLY old thread, but I just tried something pretty cool that worked! In windows 10, install bash for windows, then install the linux odrive sync or the linux variant or whatever native sync tool there is. WSL2 apparently is smart enough to take the illegal characters in windows and change them to characters that are legal. At least then you can get a good sync of your data without having to touch a bunch of files manually.

Hey @toupeiro,
This is interesting. I will need to check it out. Are the names being “virtually” changed, or are the files actually being renamed?

I just wanted to update that we have released a new version that handles illegal characters much better: