Why does my odrive still take up local disk space?

And how can I change it if I get the message “No Options Available”.

IF I do need to upgrade, will I simply select “Unsync” then my local drive is freed up, but I can bring files back through their placeholder?

Thank you for your help and clarification to a young user!

Hi @jackson,
Generally the “no options” indicates that odrive is busy doing other things and hasn’t been able to scan that item yet, or that it has an ignored name (https://docs.odrive.com/docs/sync-changes#section--ignore-list-).

The unsync feature will allow you to free up local disk space for files that are safely in the cloud, replacing them with placeholders.

If you are still seeing the ‘no options’ message, can you take a screenshot and send a diagnostic from the odrive menu? 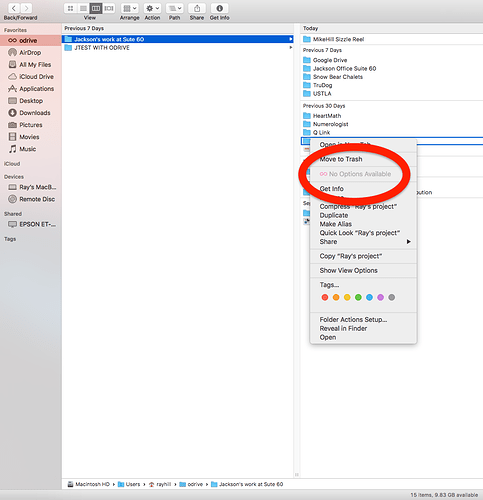 Hi @jackson,
I took a look at the diagnostics and the configuration looks odd. The two folders you have in the root of the odrive folder don’t appear to be linked folder (folders that represent linked remote storage).

I see that you have a couple items in the trash that may be links. (take a look in the trash section of the odrive menu).

It is hard to tell, exactly, but it, looks like there may have been some renames/moves and they weren’t picked up properly. I think we can correct this by doing the following:

This should bring us back to a “good” state. The next steps are a matter of bringing over any files you may have added to the ‘Jackson’s work at Sute 60’ folder and move those into the Google Drive folder and let them sync up. Keep the link name Google Drive, for now, until everything has synced up.

I’m not sure where the ‘JTEST WITH ODRIVE’ folder is supposed to go, but it looks like test data, so may not be needed.

Let me know if you have any questions about the above info.

Thank you for the detailed instructions Tony. However I may have to resend diagnostics because I accidentally Emptied the Trash before restoring those items. I see some other placeholder files on my desktop, but there’s no “Recover” option.

How will the Google Drive placeholder make it a real folder?

The JTEST folder was indeed just a test folder with a simple image.

Thank you very much for you help!
Jackson

Hi @jackson,
Can you check your odrive in the web client and tell me what you see listed there? This will tell us what you have linked, currently: https://www.odrive.com/account/myodrive

If you emptied the trash you may not actually have anything linked right now, in which case we are going to want to link your storage again.

Thank you, I see in the web client that I have my Google Drive in there. I still have a folder on my desktop with 167GB that I need to put in odrive, and I need to have some of the folders within it synced and some unsynced. Should I just separate those folders? Do I need add them to my Google Drive?

I’m pretty sure the way I linked them in the first place is where I went wrong, so thank you for your guidance

Hi @jackson,
The best bet now may be to uninstall odrive and then reinstall, so we can start with a known-good configuration. Before doing this, move those two folders out, (if you haven’t already done so) so we can make sure that data is in a safe place before uninstall.

After install and login, you will see your linked storage in odrive, which should show Google Drive.cloudf.

Now, the next step is to get your 167GB in there. This can be as simple as double-clicking on the Google Drive.cloudf file to expand it into a real folder and then moving the 167GB folder into the odrive\Google Drive folder.

I believe this is a good solution. So please confirm my recap, whether or not I’m correct.

Unsynced folders can live in odrive, and NOT take up local hard drive space.
I need to be a premium member to unsync folders.
All placeholders in odrive can be restored.

An Update, so I was able to get the stars aligned and access Premium.

I was not expecting an error after I’d just upgraded, how long should I wait? I was able to sync and unsync a different folder.

Hi @jackson,
Can you tell me what you are trying to do with the Ray’s project folder?
Can you also send another diagnostic from the odrive menu so I can make sure everything else looks in order?

Unsynced folders can live in odrive, and NOT take up local hard drive space.

I need to be a premium member to unsync folders.

All placeholders in odrive can be restored.

Yes the above are all correct.

Hello Tony,
I sent diasgnostics, so why can I sync some folders and not others?
Jackson

Hi @jackson,
If odrive hasn’t been able to sync the folder yet then you can run into these types of errors. It looks like Ray’s folder has not been synced yet (you can probably see it listed in “waiting” in the odrive menu.

It also looks like there is an error being hit on scanning in that folder, which may be preventing a proper sync. The OS is stating that this file does not exist:
Ray's project/Ray project.fcpbundle/Ray's event 12-4-17 1/Original Media/10saraandstacie2.mp4

It looks like this is inside a final cut pro project folder, which is notorious for being problematic because of the potentially sprawling structure and because it can sometimes have broken symlinks that end up pointing to nothing. This might be one of those cases, where the mp4 file is actually a symlink pointing to another location that doesn’t exist. When odrive hits it during the folder scan it errors and the folder scan can’t be completed.

Thank you for digging deep there. I do see “Ray’s folder” in WAITING, along with several other folders

Is there a way to direct odrive to the correct filepath? I’m new to Final Cut Pro’s file structure, and that file in particular is only a folder away from the .fcpbundle.

Please check out the “TEMPLATE Video Folder” I cannot sync it even though it only has other folders (no files).

And please check out the folder, “ACF Promo” I cannot sync this one even though it only has a handful of images.

Can you explain what’s going on?

Hi @jackson,
I sent you a PM with some specific file information and steps to try. Can you take a look?