Trashed Files but Not Really!

I’m regularly getting messages that some files have been moved to the ODrive trash bin, and when I check there are files listed there. They appear to be selected at random – I did not actually send any files to trash. But when I check in the actual folders the “trashed” files are still there! So I’m not actually losing any files but it is alarming to see what looks like random deletions!

Hi @natandmark2,
It sounds like odrive is detecting these deletes due to some filesystem action. Is it possible that these files are being updated or moved?

The next time this happens, can you send a diagnostic from the odrive menu along with the name of the new file that was detected as deleted?

I got a message that four files had been deleted and were in “trash.”

The first in the series of four files was called “01 The Sound of Sleat.mp3.”

I had not done anything with that or any of the other three files.

I think the actual files are still there, not really deleted.

But its disconcerting to receive a message that files are being deleted!

Yikes! I just checked and the four files really were deleted from odrive!

This is really bad – I can’t use a program that apparently randomly deletes my files.

Hi @natandmark2,
Did you send a diagnostic? If not can you do that now?

When odrive detects file deletes it means it detects that the files are not where they were on the file system. In these cases odrive does not actually do the deletion (its not programmed that way), it just picks it up and then holds the delete in the odrive trash until it is emptied or the files are restored (see https://docs.odrive.com/docs/sync-changes#section--recover-files-from-trash-)

Yes I send a diagnostic just before I sent the first email in this chain.

I understand what you’re saying – odrive is reporting not causing the deletion.

But what is causing it? Is it an amazon drive problem?

At any rate, I can’t use a system that randomly deletes files!

Hi @natandmark2,
It looks like those files were actually moved to:

They were actually renamed, and then moved, so a couple of operations. I can’t tell why, however, since that information isn’t available.

Do you have an application that is indexing your music and may be modifying the organization?

Yes, I see those files.

I didn’t move or rename them myself.

Do you know of any applications, music or otherwise, that would do that? I use Windows Media Player mostly for playing music.

It is still happening – files get randomly renamed and moved.

Hi @natandmark2,
Do you happen to use Windows Media Player to play your music? There are some settings in there that change the behavior of Media Player, including renaming music files. 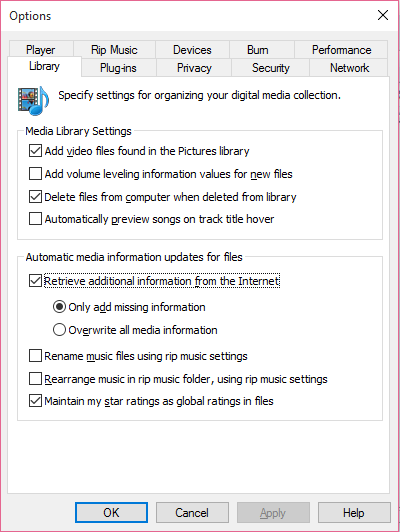 There are probably other applications that do the same thing, but this one seemed like the likeliest.

Well, it appears your suggestion was correct, Windows Media Player was going in and “organizing” my music library for me by renaming, moving and deleting music files, based on some weird algorithm known only to Microsoft! Changing all the settings that had to do with “organizing” tunes appears to have stopped this somewhat annoying feature.