Sync to odrive troubles and recovery

Hi Tony - thanks for the reply. In other words there is no safe and recommended cloud backup method to back up my whole system in case I have to restore it.

I ran into another serious problem. I did back up folders from an external drive with the sync to odrive feature. Weirdly the files and folders got mixed up ( files in wrong folders showing up multiple times ) and duplicated even though when setting up the sync to odrive sync I created a new destination folder with the name of the folder. I deleted the duplicated files and folders on the odrive ( amazon drive) BUT all the folders/subfolders/files on the external hard drive got deleted as well ! Sync again didn’t work all the folders are empty but when checking the data size on the odrive (overview) all should be there because the same data size shows when all the files where still there. What went wrong and how can I get back/restore the data?
We syncing to odrive is the data mirrored or can I archive data? After syncing to odrive is the data on the odrive also deleted when deleted on the local drive? Even worse how can all the files being deleted on the local external drive when only deleting duplicates on the odrive ( amazon drive) I’m running Mac OS 10.11.6

Hi @franzton,
I am so sorry to hear about your troubles and I will help however I can.

From what you described it sounds like the external drive may have had some symlinks on it. Since odrive follows symlinks, but cannot create symlinks in the cloud, it will result in duplicate data and structures in the cloud as the paths are followed and uploaded.

Since odrive is a bidirectional sync engine, changes on either side will be reflected to the other, including deletes. When deleting items in the cloud, the corresponding local items will be deleted. If there were symlinks and the “origin” of the symlink was deleted, then that would cause a local delete of the original file/folder and any pointers to the original file/folder. The result would be that all references to the file/folder would be deleted. Local odrive deletes are held in the odrive trash, and not committed to the cloud until the odrive trash is emptied, as a safeguard.

The good news is that most cloud storage has its own trash, so you can recover deletes you have made. You mentioned Amazon Drive and Dropbox earlier, which both have their own trash that can be recovered from:
Dropbox - https://www.dropbox.com/deleted_files
Amazon Drive - https://www.amazon.com/clouddrive/trash

I think you were uploading to Amazon, so please take a look there for the items you deleted. If you see them you can restore them by selecting the item(s) and choosing “restore” at the bottom.

Additionally, you stated that the external drive still seems to be holding a lot of data, even though you cannot see it. Since this is a Mac, there is a possibility that the deleted items are in the Mac trash (.Trashes) on the external drive. When a remote delete happens, odrive will try to move the locally deleted files to the OS trash, if it is possible to do so. Do you see the files in the Mac Trash? If so, you should be able to “put back” those deleted files.

Please let me know if you have any questions.

Hi Tony - thank you for the fast and very knowledgeable reply. This is great customer service.
I’m now in the process of restoring the files from the amazon drive trashcan. Yes the folders are in there. I clicked only on one folder so far ( to not confuse the system) and hit restore but nothing happened yet. The problem is that I have several of the same named folders in the trashcan since I had many duplicates of the same folder which I deleted.
I don’t really know what is in the folders ( since I can’t preview the folder content in the trash ) and don’t know if I should restore all folders with the same name or only one. One would make more sense otherwise the same duplication mania continues.
I understand that the the odrive sync engine is bidirectional but is there a way of archiving data ? I thought one of the beauties of the odrive interface/functionality is that this is possible. Only being able to mirroring data like with iCloud or drop box drives me nuts since it doesn’t really free up space on my local drives.
Please let me know what the best method is to archive data from local external and internal drives.
Sorry for making an inaccurate description but the statement that the drive holds still the same amount of data referred to amazon drive and not the local drive. I’m aware how the Mac trash concepts work. You pointed me anyway in the right direction to the cloud trash bins which is basically the same concept.
Another weird behavior is that my local odrive deletes are NOT held in the odrive trash - I don’t see anything. Also the rest of my computer stuff operates normal and the system runs fine.

Hi @franzton,
Since Amazon Drive storage is unlimited, I wouldn’t worry too much about being selective in restoring your data. I would restore it all, then sort out what you don’t need. If you have done so already, make sure you remove sync from the external drive so that odrive is no longer trying to sync it to the cloud. You can re-enabled it later to pull the data back down the the drive, once everything is sorted out in the cloud. 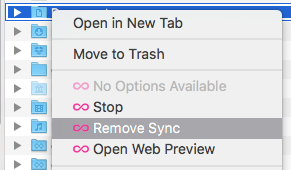 The odrive engine is flexible, but it only runs in full, bi-directional sync mode right now. We are working on a backup feature, which will be one-way, backup/archive. In this mode changes on the cloud will not affect the local data. I believe this is the functionality you are ultimately looking for. We are hoping to release this in the next few months.

As for odrive trash content, only files in the local odrive folder that you delete will be shown in there. So, for example, if you were to delete odrive/Amazon Cloud Drive/test.txt, test.txt would show up in the odrive trash. It would not be deleted from the Amazon Drive cloud until you emptied the odrive trash.

Hi Tony - good to know that you’re working on a backup/archive feature. I guess that for now the closest to it is the placeholder setting. Not taking away storage space on the local disks and having the full data in the cloud - let’s hope that I can straighten out all the weird behavior of my setup right now. I love the features odrive in combination with amazon drive unlimited offers. Let’s hope that I finally get it to work reliably - best Franz

forgot to ask: can I restore all folders/files from the trash at the same time or should I do them one by one ? I synced several folders to odrive right after each other and I think this could have contributed to the mix up as well

Hi @franzton,
I have successfully restored multiple items at the same time from the Amazon Drive trash, so it shouldn’t be a problem. If you are worried about it you can try selecting several, instead of all, and see how that goes.

I believe Amazon is just moving the items from the trash back to where they were via metadata manipulation, so the process should be simple and have low overhead on their side.

Thanks, Tony - yes I did it - it still took quite some time to sync it - the initial move out of the trash in amazon drive was very fast but the syncing took time since the data had to be transferred back to my external drive. Now I have again several duplicated folders with the same name in the folder I dedicated to the sync to odrive and its subfolders BUT also as duplicated files on the whole Amazon Drive. In other words, every time I do a sync to odrive I get more of the same. Is there a way to remove symlinks ?

As you suggested I restored all and removed the sync link from all the local folders. But now all of the restored folders on the local drive are empty and I have to double-click on them to see what data is in there. After that in some of them, place holder files will pop up , some of them remain empty. Does this reactivate sync or is the remove sync still in place? Do I first remove the duplicated files from the cloud or the local drive ? In future should I use the upload folder feature for external local drives as well ? When uploading folders from the internal drive everything worked as advertised my troubles started when syncing to odrive my folders from external drives which I thought is the proper thing to do - thank you for your help- best Franz

First, I just want to make sure you have recovered all of your data in Amazon Drive. Is that correct? Are you able to browse through the Amazon Drive’s web interface and see all of your files?

I’m not quite following what you did for remove sync. I originally suggested doing that first, but I probably didn’t make that clear enough in the midst of all the other information. It sounds like you just did removed sync, after restoring all of the cloud data. Is that correct?

Once you have removed sync, the local folder will no longer be linked to the remote folder, so the clicking on placeholders won’t work. You will need to link it again (sync to odrive), making sure you are targeting the proper remote location. As a reminder, here is a post about the current behavior:

Why is "sync to odrive" uploading my files into the wrong folder?

Fortunately, we just made a change, to be rolled out soon, that will prevent confusion like this.

By the way, I moved a lot of this discussion to a new thread (here) so it can be tracked/found better in the future.