is it possible to use the sync an arbitrary folder feature and also have it be encrypted? currently it looks like no since you are not able pick a sync destination in the Encryptor folder

Currently this isn’t possible, but we are looking at offering this in our future version of encryption.

I requested this exact feature in this thread but odrive has yet to weigh in on these suggestions. Suggested feature enhancements for encryption

Sorry folks. Busy, busy. This is planned as part of the new encryption, although it may not be in the first cut.

Yeah, I was also wondering about this; I, too, tried to sync a folder outside of my odrive folder to an “Encryptor” destination – and it didn’t work; but the error message was a bit cryptic (“This folder is only accessible with the odrive sync desktop application”) and I couldn’t find any definitive documentation anywhere that it wasn’t supported. Thanks for asking, cuz I was going to ask too!

Here’s a handy guide to filesystem links which includes how to do it on Windows and Linux (which also works on Mac and other Unix-based systems), as well as a link to a handy GUI tool (an explorer shell extension) to make it easier on Windows: 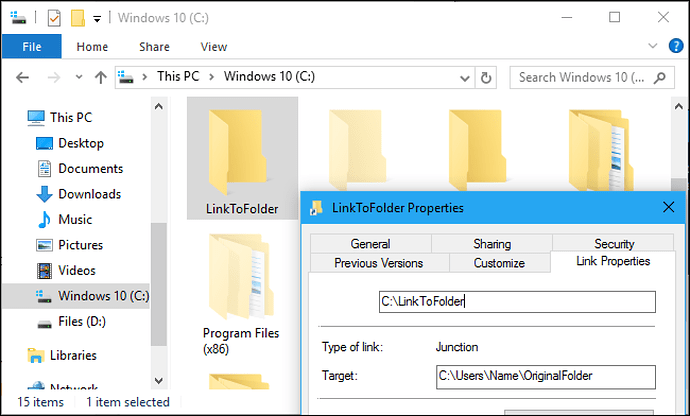 The Complete Guide to Creating Symbolic Links (aka Symlinks) on Windows

Windows 10, 8, 7, and Vista all support symbolic links—also known as symlinks—that point to a file or folder on your system. You can create them using the Command Prompt or a third-party tool called Link Shell Extension.

NB: This doubles as a handy way to link arbitrary folders into the folder of any given native desktop sync client. : ) But it’s certainly easier to do it with the odrive desktop client’s feature.

I missed this previously, but I just wanted to point back to another thread that had some discussion on using symlinks/junctions. We don’t officially support them and often recommend not using them, although there are more advanced users who use them successfully:

I think I may have caused some confusion in the previous post. To clarify, you cannot sync a new, top-level encrypted folder through the CLI, since it requires the passphrase to be put in on the first expand. It's a one-time thing and is something that needs to be done regardless of the UI/interface. All subsequent activity via the CLI in there does not require any entering of the passphrase. In short, it doesn't require any more work than before. As for symlinks, we don't officially support u…

Hi @dubaaron, Storage sources without a “trash” (FTP, WebDAV, SFTP, for example) are more risky because you can create reactions on the storage source that cannot be corrected or recovered. The bad results I spoke of above were actually on Dropbox, but I don’t consider it more susceptible than others. This all being said, even though we don’t officially support symlinks, it is ultimately your system and you are free to do whatever you feel is best for your own use case and skill set. You can u…

A user had an issue with symlinks recently which caused a bunch of confusion some inadvertent user deletion of data, so I just wanted to make sure folks are aware of the potential complexities with that sort of setup.

Has there been an update on this at all? I have preexisting files I would like to encrypt on Amazon Drive, and the process of redownloading all of them, and then reuploading, would be a bit of a hassle.

Hi @nicksatin,
The new encryption is all part of the massive update we are working on for odrive. Please note, though, that the new version will still need to download the file, encrypt, and re-upload, but it will make the process simpler and in-line.