When working with files (doc, xls, pdf) saved in Google Drive, I’m often seeing two copies or versions of what I save. There are four letters and/or numbers appended to the end of my file name. In my odrive folder for those files, you see them both.

Google drive allows files with the same name to exist in the same directory, simultaneously. Because of this, we need to differentiate on the desktop, since desktop file systems do not allow this.

When you look at these files in the Google Drive web application, what do they look like? Can you provide a screenshot showing them in the OD web client and the odrive desktop client, side-by-side? 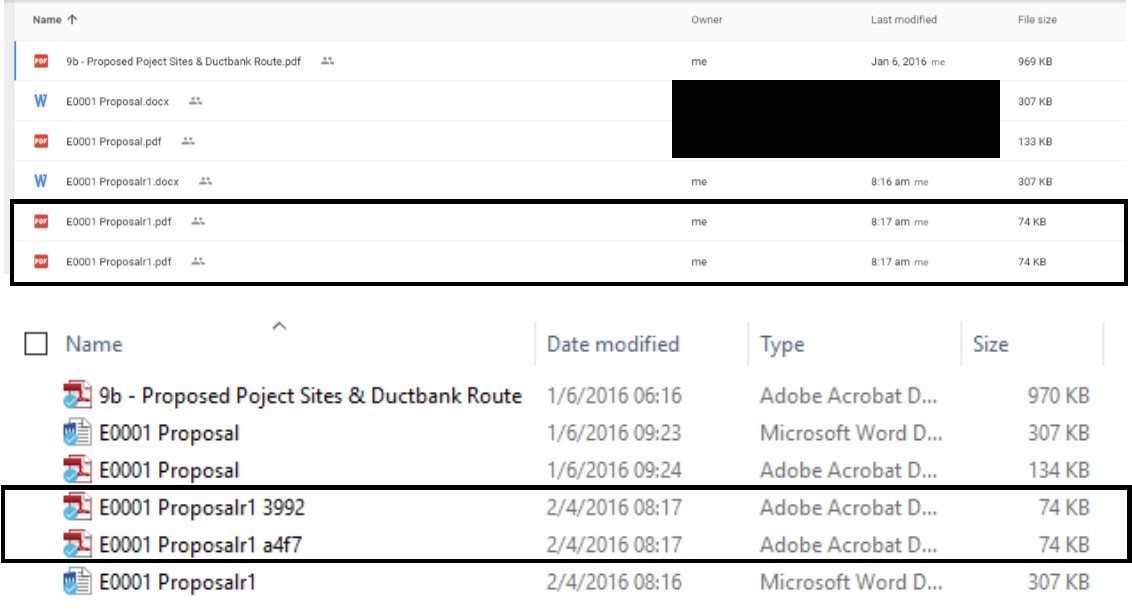 Thanks. Is this particular file shared with someone else?

Have you been able to determine a reproducible scenario to create this behavior? If so can you walk me through it?

Yes, it’s shared, but no one accesses it but me. The only thing I can think of is that it happens often when I have the file or folder open for a long period of time. As if it’s trying to sync, notices its open, and recreates a second version.

Taking another look at the photo, it looks like you made an edit (removed some content it looks like, judging from the file size change) and then saved it on 2/4 08:17, is that right? Then at some point it made a duplicate of that particular save?

What is strange is that it is not overwriting the existing file as a version. Are you seeing that edits normally replace the original file?

I am having a very similar problem. I just created a new request. Mine keeps creating files over and over on google drive until it is full.

I am having so many duplicate files that google drive get filled up with 2-5 copies of each of my files. The longer I use it the more duplicates it adds till the google drive is full.

@DJI
Can you verify you are running the latest odrive version? (v4938 on Windows and v4980 on Mac)? There were some adjustments made to our latest versions that should reduce the chance of duplicate creation in Google Drive.

If you are on the latest version, are you still seeing these duplicates being created?

Yes, v4938. Sometimes i’m having many with the exact same name showing up on Google Drive, like 8-10 files all the same name.

The next time you see this happen (timestamp is fairly recent on the duplicate files), can you send a diagnostic over? You can find that option in the odrive tray menu.