Option to not popup with errors and failed actions

would be great if we could have a setting that disables the popups from odrive. so annoying if you setting odrive to delete the few thousand files for example and just have it pop up on you while you are watching something or playing a game. tilting to say the least atleast for the games.

if it has issues deleting files (which it does all the time!!!) then it should not popup and even better auto retry after a few min. that click ok when something failed is not interesting at all. i clicked delete trash right? what does it matter if it failed or not. it should just retry.

main issue is the popup tho… esp for those of us that play games. and it ALWAYS comes at the wrong timing in the middle of something hectic

Good feedback. Would you be able to supply a screenshot of the error you are seeing when this happens. I’m just curious what error you are running into most often.

Also, are you utilizing auto-trash, or are you always kicking it off manually?

dont have premium so its all manual. the trashbin is quite full 24k files now. always fails before it manages to delete 2k files tho. its the rate it accessing the amazon api. its stressing the server and times the client out.

there is actually two popups i get. the api stress limit and one that it just fails. 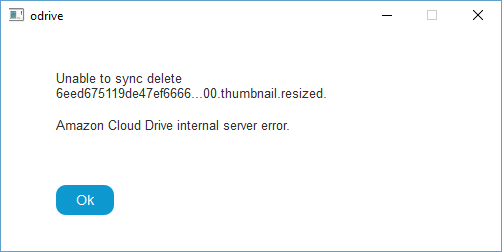 this internal server error doesnt happen much tho, the api access one is the worst.
shouldnt odrive space out the actions it takes on the server and their api so such errors doesnt happen? a 1 sec delay can help alot i think.

will post a screenshot of the other popup i get, which is the rate it accesses the api.

Thanks! Can you also send over a diagnostic from the odrive tray menu? I want to see if we can gather more info on that generic internal server error.

sent and here is the second shot: 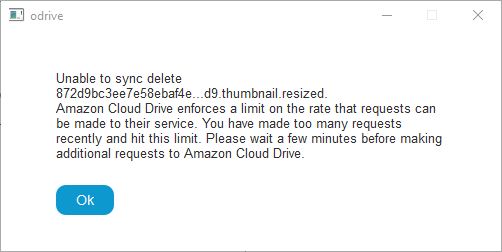 Thanks for sending that over. We are planning to adjust our exception handling to react to these types of errors in such a way that it will not halt the intended operation.

In the meantime, we can try creating a script to empty the trash for you in the background, which would power through any Cloud Drive errors until it was done.

Is this on Windows?

Here is a simple script to empty the trash:

Copy the above and paste it into a command prompt session (cmd.exe)
This will download our binary cli cilent and then tell odrive to empty the trash until it is empty.

Here is an abbreviated command that can be used in the future, after the odrive CLI binary has already been downloaded:

thanks, running it now… this is gonna take a while >__<