Is it possible to move the odrive folder out of the user profile directory in Windows but still have it appear in the list of folders when you open the user directory in explorer (similar to the way OneDrive, My Pictures etc works)?

I understand that odrive creates a quick link in the explorer menu but I would like to still have a link in the user folder.

Hope that makes sense, I can attach a screenshot if it helps.

Hi,
You can create a shortcut to the odrive folder, if you like. To do this you would right-click on the odrive folder and select “create shortcut”. Then you can move that shortcut into your user profile directory.

Would that fit your use case?

Thanks for the suggestion but it does not really fit my use case.

I understand that the likes of ‘Pictures’, ‘Music’ and ‘OneDrive’ are ‘special’ folders that Windows treats differently to others but I do like the way that they can be moved from the user profile but still appear as real folders in the User folder.

In the case of OneDrive specifically, it shows the same overlay icons as the real folder location, which means that you can easily check the status of sync’d files without having to move out of the user folder. The shortcut would work I guess but it in explorer it sorts differently to a real folder so it appears out of order.

I tried to set up a junction point to see if that would do the trick, it worked but the overlay icon was broken.

If it’s not possible I’ll get over it but it seems like it might be a nice addition, assuming that the OneDrive folder isn’t using some sort of internal MS api.

Unfortunately this can’t be supported at this time. Microsoft does something unique with the OneDrive folder. It only shows up in Explorer, as opposed to on the file system itself. I guess this means they are using some private method to create it…

Is there a way to change odrive folder from c: to another dirve?
I used “Move odrive folder” from menu but in file exploder this is still c:/users/my_profile/odrive/ … 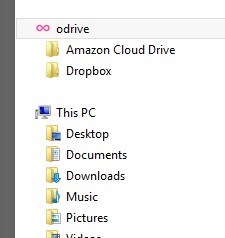 Hi @playerpl,
Move to odrive should be doing what you want. After using the odrive move feature, where are you taken when you click on “Open odrive folder” from the odrive tray menu?

when it didn’t, can i correct path by myself?

Hi @playerpl,
If you open a normal command prompt and copy and paste this in, changing the $folderPath to where your odrive folder is, it should correct the path:

Unfortunately when i click on new one it gets me message
"G:\odrive\Dropbox\MyFiles.cloudf The directory name is invalid."

Hi @playerpl,
Can you send a diagnostic from the odrive tray menu?