Method to SPEED up syncs/unsync with your cloud (almost!)

I’m finding that syncing files that are stored on my Amazon cloud account has been taking forever lately. My internet connection is like a firehose with speed tests from my Florida home to Atlanta or DC at 125 Mbps down, 32 Mbps up on average… but my Odrive files come down from Amazon Cloud like a dripping faucet, somewhere in the 10-200 kiloBITS per second on average, but it fluctuates dramatically, sitting at ZERO more often than moving…

Assuming the bottleneck between me and Amazon may (hopefully) be a “per TCP connection” throttle and not a “by IP” throttle, I decided to write a little CLI script and run multiple instances of it simultaneously, in hopes of scaling my sync speed a few times - at least…

This is a bash script using the Python CLI commands that I wrote to run on Mac OS-X Sierra
(NOTE: Today I read something about possibly checking the “syncstatus” state on each file before moving on to the next, so I may need to add that code yet):

OK… Yeah, yeah I know - lots of debug output but I need it until working.. I’m not a coder either, but this style “works for me.” lol. I write extra statement so I can open it a year from now and “read it like a book” to remember…

It seems to run every time, and sometimes even snakes it’s way through as many as 80 files, but eventually it freezes at the sync command… I’ve had as any as four instances running at once, with unpredictable results (any of 1-4 of them can freeze suddenly at any time for no apparent reason).

Anyone have any ideas on,

You might ask “why” would someone want to sync everything?? Well, simple. My files are an absolute mess in this encrypted odrive folder, and the only fast and clean way I know of to remove thousands of duplicate photos and reorganize all folders is to download everything, clean it up locally, then give it a month to all unsync back “up”… I have 6 TB of data tucked away in this particular Odrive folder, so yeah, this will take a while.

Hence the need for some parallelism!

Any help appreciated with getting this to work. I’d like to see 10 threads go for days without fail!

Hi @spacecommguy,
Thanks for the extensive writeup and contributing to the forum. I love the enthusiasm

You are correct that Amazon Drive seems to be susceptible to slow single-instance downloads/uploads and benefits significantly from concurrent transfers, if your bandwidth can support it.

I haven’t actually tested running multiple agent instances as the same time, but I would guess that there could be problems doing so. All of the instances will share the same persistence and config, which may be causing some race conditions and locking out of the instances while one tries to write to the persistence layer. The same applies to the downloads. Downloads are done to a temporary file and then renamed once the file has finished. I am guessing that you may end up with parallel downloads of the same files as each instance is blissfully ignorant that another instance has already started downloading that file. It will also increase the overhead quite a bit.

Have you taken a look at this post here?

Linux/MacOS bash-based: This uses find to recurse and sync. The output is not ideal, though, since it is all queued up. You would need to change the path from ~/odrive-agent-mount/Dropbox/ to whatever you require, of course: output="go"; while [ "$output" ]; do output=$(find "$HOME/odrive-agent-mount/Dropbox/" -name "*.cloud*" -exec python "$HOME/.odrive-agent/bin/odrive.py" sync "{}" \;); echo $output; done This second one uses an extra file descriptor trick to push the output out in realt…

These are a few iterations of some one-liners, including running parallel downloads. You could parse one of the examples out into proper script form, with better feedback and logging.

I actually just used a variant of this one, yesterday, to download 2TB of data from Google Drive in one go:

I was averaging about 200MB/sec download with 10 concurrent transfers against a single agent instance.

I attempted to run it tho, and I’m getting a response of:

have to go research this… Once I get it working I’ll open it up!

You may need to add “python” to that command:

In the meantime I went and did a chmod 777 on $HOME/.odrive-agent1/bin/odrive.py, and re-ran it… and… It’s running! 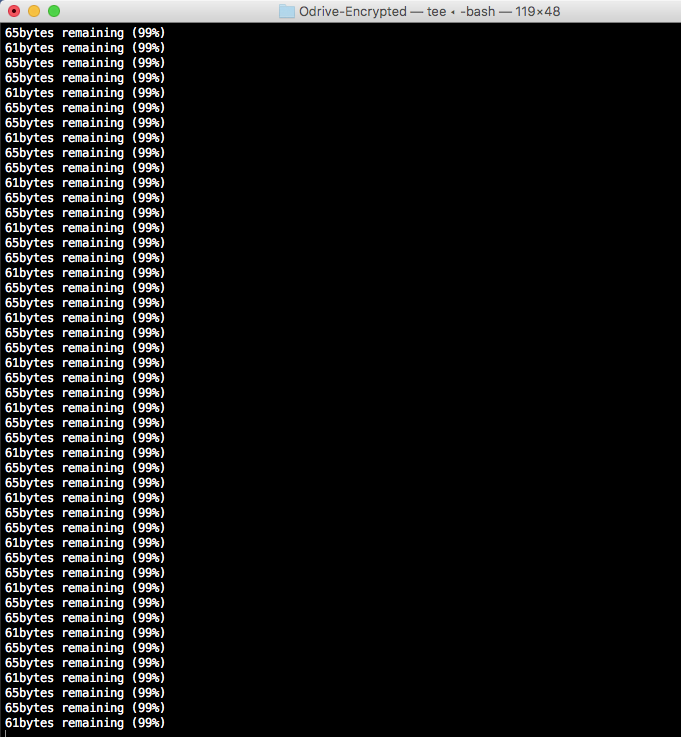 Hmm, that is odd.

Just to test, I am running the same command against my own Amazon Drive and it is flying along at 15-25MB/sec. Its gone through about 12GB so far. It will slowdown when it hits a bunch of folders to expand, or smaller files, but I don’t see any hitches. Keep in mind that doing this will spike your CPU. My Mac sound a bit like a jet at the moment.

I am running this against the odrive desktop client, however. I would recommend you try that, as the desktop client is a little more robust and running a slightly newer version of the sync engine than the agent. Additionally, if you run the desktop client you can send over a diagnostic for me to take a look at if things hitch again.

When running this, make sure you only have one instance of the odrive engine running at a time. So don’t run agent and the desktop client at the same time, for example.

Thanks Tony. I did, to no avail. I’m out of time and am doing each file manually now. See related thread here: Need a fix for “No options available”