Hi. I have a sync set up to a remote FTP server that is configured on odrive to allow 2 connections. However I am getting an issue where the client is creating 3+ connections and will then run into trouble when the FTP server kicks the client for running too many. Is this a know bug/issue and do you have a resolution?

Hi @face,
Are you seeing that there are 3 concurrent connections to the FTP server? My own testing here shows that the connections are being limited to the specified number.

I have seen where certain servers will restrict the total number of connections over a certain period of time. This means that, even though concurrent connections are limited, the total connections over time will be large enough to trigger an exception from the server.

Can you tell me what FTP service/server this is?

I can’t see the processes on the server as with the exception of creating users I have no control over the configuration of the server. What I have seen is 3 files at once being uploaded by the Windows client when I look at the system tray applet.

It would be possible to create a dummy account for you to have a play with if required, and I will raise a ticket with the server provider to see if they will tell me what ftp server is running.

Hi @face,
I dug into this and it looks like the threshold may be set incorrectly. I will investigate more, but for the time being, try setting the max to one less than desired. I think that will resolve the issue (unless your desired is 1). 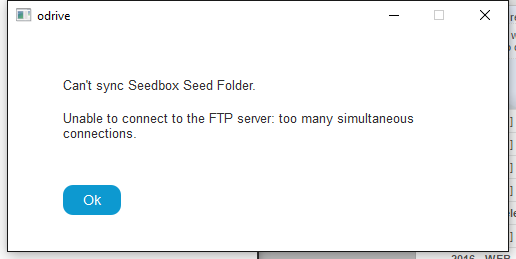 Lowered the limit to 1 even though I should have 4 concurrent connections allowed. Seemed to work OK for a few hours, but I have just forced a sync before I close down for the night and got the message again.
Annoyingly I can’t tell if the process has bombed out completely, or what state the sync is in. Sometimes it appears to keep running for a while and at other times it seems to just stop.
I Do wonder if this behaviour is the cause behind these orphaned files I am finding as mentioned in my earlier post?

It may be possible to see this if there is background work being done (refreshing changes, or syncing files) and you try to perform a manual action (like double-click to sync). This is because odrive is enforcing the limit.

I will take a look at your other post for the temp file issue.

Hi. Sorry to resurrect this old post but I’m still seeing this issue and I’m wondering if it will get resolved at all before the next update? It’s getting frustrating having to keep manually restarting the sync process time and time again and then manually check that everything had synced ok.

Hi @face,
There was a fix back in February to correct the FTP max connection tracking (it was off by one). Are you still seeing the number of connections are exceeding what you have set as the max?

Can you also tell me which provider this is, or what FTP server they are running?

When I download from the FTP manually using Filezilla I can run 4 transfers quite easily without a problem. I have set odrive’s connection limit to 1,2,3 and 4 connections but eventually they all come back with the error window shown in my earlier post. There is no logic to the failure, it can happen after any length of time and doesn’t stall on any particular file. Unfortunately I can’t get details of the FTP server at the moment, except that it runs on a linux box. I have asked again for more details and hopefully they will provide it in the next few days.

Hi @face,
I did some digging today and I see something that I didn’t realize before. The “too many simultaneous connections” error can actually be hit in two ways:

I am going to put in a request to differentiate between these two errors, since the causes are different and it is difficult to know which is being hit when the error returned is the same.

Since the issue with internal connection tracking was fixed, you should be able to set the odrive link internal connection limit to the same number as the server limit (4, I believe) to reduce the chance of hitting the client-side limit. Even if things are set perfectly, there is always going to be a chance you hit the client-side limit unless you are able to increase these limits beyond 4. Is that a possibility, or is there a hard max limit of 4 on the server?

I’ve had a reply from my provider…

So should I increase my limit to 30 inside my settings to see if that stops it from bombing out? What I don’t want is for odrive to start to saturate my internet connection!

Hi @face,
odrive will only use a couple of background processes, so I don’t think you will see much of a bandwidth utilization difference. I would give it a shot and see how it goes.