I’ve been trying to backup my slack pictures folder. I do this about once a year. We have multiple cameras uploads into slack and some of them just won’t sync. I can use odrive.com to view the images, but not the windows app.

One set of uploads, the image from google camera on an android phone would not sync and an image from opencamera on the same phone syncs fine. The ones that won’t sync all seem to share the same naming convention so I’m assuming they’re all google camera.

In the image below, 6772.jpeg was from the opencamera app on a samsung s5, and the selected photo with the error is from the default google camera app on the same phone. The third image in the list is from an unknown app/phone but it also won’t sync.

This happens for all the photos with the date_time##.jpeg format

Hi @ghenxx,
odrive does a size check after download to make sure that the size reported by the service is the same as the size of the downloaded file. If it isn’t it produces this error.

Can you send a diagnostic from the odrive menu so I can take a closer look?

Thanks @ghenxx,
For some reason these particular files are not being downloaded as the same size they are reported being by Slack. I’m not sure if slack just has it wrong, or that these files were uploaded in some way to make them have an incorrect size.

It sounds like the Google Camera app is the common link for these files. Is that correct?

If you upload a new photo from the same app, does it create the issue?

What happens if you download a picture having issues (from within the Slack app on the web, for example) and then re-upload with the Slack app? Is that file able to be downloaded via odrive?

All new photos with that naming convention seem to have this problem too. I believe it’s related to the google camera app, but I can’t confirm that since the 2nd device with this problem is in florida haha.

I downloaded a confirmed error’ed image using the download button built into odrive.com as well as right click -> save as. Then I reuploaded them to slack using slack’s desktop client. Then I downloaded them again using odrive’s connection.

Both of these tests correctly synced from slack.

Next test, downloaded the same image from slack and reuploaded it. Because it was the same name I think I freaked it out and it downloaded.

Next test, I downloaded a second error’ed image from slack directly, renamed it, and uploaded it to slack. Then I synced it via odrive. This test was also successful, the image synced perfectly fine.

The folder is called odrive(1) because I did a reinstall, also this is two separate computers for the screenshots. 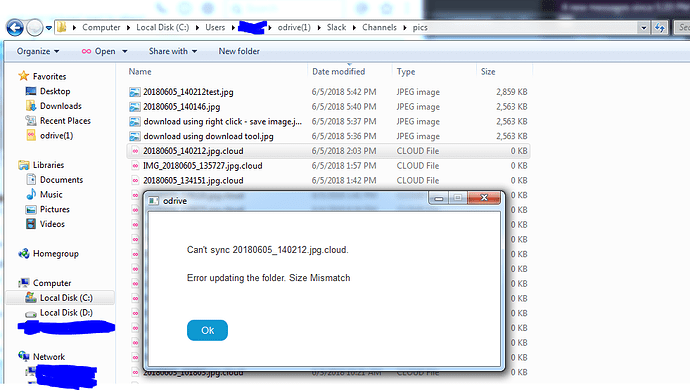 Thanks @ghenxx,
Can you tell me what the specific app is? We can try to test it and see if we end up with the same result and what we can do about it (if anything).

One thing that could be done is have the sync process skip those files and continue syncing ones that work.

edit: I found out that the default google camera only has one naming convention and it can’t be changed. Some images have the same name on multiple devices. Slack is handling this ok somehow, but this could be part of the problem downloading them.

Thanks for the additional information @ghenxx.

I am going to see if we can figure out what that app is doing. In the meantime, you should be able to “power through” these errors using the CLI to download. It is a more advanced method, but it basically users sheer, dumb, brute force to download and won’t stop when there are errors like this one. These files will remain in an non-downloaded state, but the rest should be able to move forward. Once it downloads everything but these problem files, it will just cycle endlessly, so you will want to stop it at that point. Keep an eye on things as it goes, since it is possible that it will get “stuck” on a chain of non-downloadable files, depending on the structure.

How can I force a recursive download with the CLI? I Have a Question

How can a recursive download be forced to continue, despite the storage exceptions that odrive may encounter?

Was this issue solved?

Hi @dmitry.kashkarov,
Unfortunately the issue here is related to how Slack is recording the file sizes of these files. It reports that they are one size and then the actual file downloaded is another size. We have a check on this to make sure we do not download partial/truncated files, and that is what is tripping here.

There is a possible enhancement to allow this to be turned off, but it has not been reviewed/prioritized yet.

Our latest versions have added some configuration files to the root of the odrive folder that can control more advanced settings. One of these settings is "ignoreSizeMismatch". This is set to false by default, but can be set to true to ignore a size mismatch, if encountered.