Encrypt a folder with two keys

// What is the behaviour of this anomaly?

This small anomaly showed me some behaviour of ODrive that I would like to discuss. (For simplicity, let me refer to the folders with their passphrases).

Additionally, I tried to rename the folder. This worked. I also expected this, because the folder name of the root folder is not encrypted.

// Why am I deeply concerned?
In order to use ODrive, you need to be able to trust ODrive for the full 100% to sync files. This examples shows that the icons of ODrive are not to be trusted 100%; I thought I had all the files in my folder “123”, but in fact, I was missing the files put there through folder “abc”.

When you setup an Encryptor folder, odrive will notify you if there is content already in there, like this: 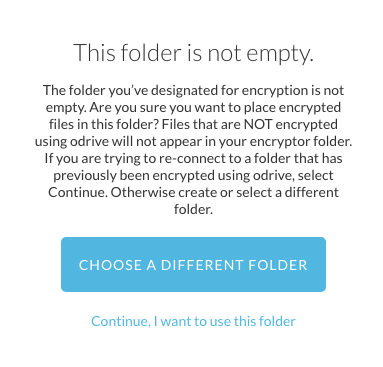 Did you see that message?

Can you also tell me how you ended up in this state? There are a few hoops that you would need to jump through to encrypt a folder with two separate keys. I would like to make sure there isn’t an unaccounted-for way to hit this scenario.

No, I didn’t see this message, because at the setup, the folder was empty.

I’m happy to shine a light on the steps I took.

Between step 4 and step 5 was more than a minute.

// Sidenote
Possibly, we are touching another thing that I don’t understand. I use the above 3 steps to always create a folder for encryption. I don’t know how to encrypt a folder I am already syncing to Amazon or how to set-up a sync with an encrypted folder. Hence, all my encryption folders reside in the odrive-root, what is for me the only place to access them.

Hi @tulipit,
I see now. Since odrive doesn’t track anything about the encryption (zero knowledge), all determination for what is in that folder is done on the fly, based on the contents of the local folder. Basically odrive looks to see if you have already defined a passphrase for this folder. If so, it uses that to try to decrypt the names of the content in the folder and displays what can be decrypted using the passphrase. Anything that isn’t decrypted using the passphrase is not shown.

In your case, odrive saw an empty folder on both machines and asked you to define an passphrase for the folder (thinking its being used for the first time). Since you defined different keys on each machine, those instances of odrive created - and, subsequently, looked at - only content encrypted with the defined passphrase.

The current version of encryption is confined to the Encryptor folder in odrive. Our next version will allow for arbitrary locations.