I’ve been battling with this problem since the first moment of installing oDrive and I can’t figure it out.

I copied several backup folders from my local drive into oDrive with the intent of using “unsync” when they were successfully copied to Amazon Cloud Drive in order to free local space.

Everything appears to be synced: I have checkboxes next to all folders. If I proceed to “unsync” the base directory, I get an error like that pictured. I get a different error depending on what folder I choose to unsync. Most work but those that don’t always report some “dot” file as not being synced.

I’ve restarted oDrive, turned the Finder extension on and off, rebooted, etc. and nothing helps.

Is there a magic trick to get these file to sync? I thought maybe I there was a white/black list somewhere but I can’t find it. 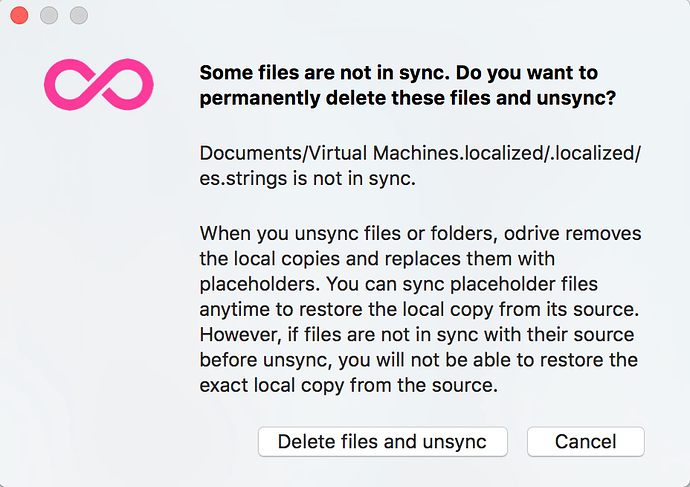 Hi,
There are certain files that are blacklisted, like .DS_Store, which will not try to sync and will not pop a message like this.

ADD NEW FILES To add new files or folders to odrive, just click and drag them into any odrive link folder or save a file directly to it. Under the hood, odrive will process the files/folders in a way to optimize a successful transfer to the cloud,...

I saw you had posted to this separate thread, so I moved my response over.

There’s nothing in “waiting” or “not allowed” but the list you posted are exactly the files that aren’t syncing and are preventing a clean “unsync.”

Is there a way to remove a few files from this list on my local install? I’m syncing development files for various apps for safekeeping and “.localized” is one I need. I can live without “.DS_Store” but the various internals of app bundles definitely need to be synced.

Hi @cscott,
Currently there isn’t a way around not syncing the blacklisted items without renaming them.

I noticed the example given is part of a VM bundle. is this for VMWare Fusion?
Are you syncing actively used VMs, or are you using odrive for archiving VMs only? The reason I ask is because we recommend not having actively used VM images/bundles inside odrive. Here are some thoughts I wrote on the subject a while ago:

Hi, Trying to sync an ever-changing virtual machine disk image in this way is probably going to create some unexpected/bad behavior. Are you actively using the pvm while it resides in the odrive pro synced folder and odrive is running? What is possibly happening is that odrive is uploading the file, which is holding an open file descriptor on the pvm file, and preventing other applications from opening it properly. There could also be some strange application-level conflicts as parallels uses …

If these are for archival, you could zip/tar/rar the VM bundles up to avoid the blacklisting of the individual files inside.

I’m not running VMs from the odrive folder. The “.localized” extension is used commonly on MacOS. iTunes and multi-language applications, for instance. That particular folder is part of a backup of an old computer.

Basically, my use case is I have build assets that go into the odrive folder so they’re available on several computers for testing no matter whether I’m at home or at work. As it is, the applications are incomplete because the app is excluding “.localized” files.

I could tar them up, put them into odrive, and then untar them on each of my workstations but that seems contrary to your ease-of-use paradigm, not to mention is a huge burden to transfer to me.

My goal was to fire Dropbox since they can’t seem to be bothered to keep my user credentials secure but it looks like odrive combined with Amazon Cloud Drive isn’t the silver bullet I had hoped.

Basically, it comes down to this and you can share this with your PM folks so they understand the crux of the problem:

When I drop something into odrive, I expect it to emerge on the other side in exactly the same state as where I dropped it from. This means you don’t get to arbitrarily decide what shouldn’t be sent to my cloud account, particularly without providing me a mechanism to change what you’re blocking.

It also makes “unsync” completely useless to me, so you’ve lost a paying customer as a result.

Thanks for the feedback @cscott.

Part of the large project we are working on now includes the groundwork for a customized blacklist. When this comes it sounds like it should solve the issues you are facing. There is a thread discussing this here:

Starting this thread from thoughts by @EthanH so that others can engage, too... Can odrive please give the ability to add per-user file exclusion masks? Better still would be the option to specify exclusions on a per-share basis as well as globally. Do others want this capability as well? What are your specific needs? 1. Is a simple exclusion list based on file extensions good enough (probably best bang for the buck and least complexity to understand/use)? Or do you need the ability to f…

Currently we’ve taken a generalized approach to the list, which works well for most users, but I definitely understand that it can cause some issues with some use cases and file sets.

Awesome. I’ll add my +1 to that discussion.

I know that my usage is a little contrary to normal… I just really, really want to get rid of Dropbox and you guys are so close that it’s frustrating.

Are there any documents on the blacklisting bits? Are git dotfiles synced or blacklisted?

Hi @shaiguitar,
Here is the list of ignored files: https://docs.odrive.com/docs/sync-changes#section--ignore-list-