I have been uploading a couple of TB to Amazon Drive and it looks like the upload process is almost done. The number of files I have locally seem to slow odrive down, so I want to unsync folders to save space and speed things up.

However, the process of unsyncing these folders has proceeded in fits and starts. The main problem is that some folders just won’t unsync. It is incredibly frustrating—otherwise, odrive seems to be doing what it’s doing, and is careful not to delete data (thank you)—but odrive is not accurately reporting what is synced/not synced.

Instance 1: The finder shows that that top level folder is in sync (blue check mark) but when I try to unsync, a deep file is not in sync and will show the following error:

I will then try to Refresh or Sync the folder. Sometimes this will solve the issue, but most times it will not. 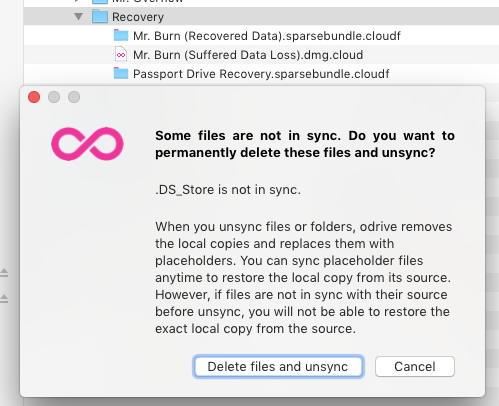 I’ve gone and replaced the local copy of what is reported to be not in sync, done a full folder resync, and then again get this message.

I’ve got some more information:

The way some folders are named is causing a problem: I often use a tilde ~ to begin folder names, e.g., “~Old”

odrive seems to choke when syncing these folders. Renaming the folder to remove the ~ character allows odrive to sync the folder. I have hundreds of folders that begin with ~ and I’m not going to rename them to work around this problem. This seems like an odrive bug, right?

With tilde = no sync 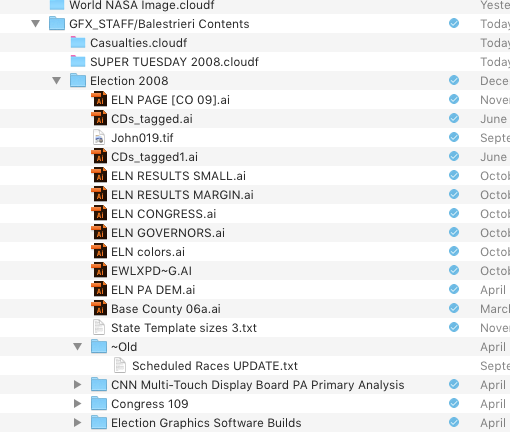 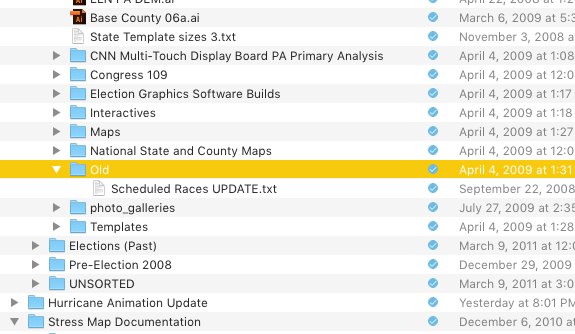 Some more info: Folders with .extensions in their name are not being synced.

I didn’t do this, but this is how iMovie stores files:

Hi @mrjohn,
My apologies for the confusion and inconvenience.

In general, all of the items on this list are either system-reserved files, illegal names, temporary files, and cache files. Some of these were added due to overwhelming requests.

@Tony Can I change the ignore list to include them? I at least needs items that begin with ~

odrive is getting stuck on the .ds_store file — I don’t want those synced, but odrive is not ignoring it when it’s trying to unsync the drive. Is it because .ds_store was synced BEFORE you added it to your ignore list, and now the server has a .ds_store but odrive won’t ignore it on the local drive? Sounds like an odrive bug, if so.

@Tony Also, Zero-feedback is given by odrive that these files are not allowed — They need a badge or please list them in the “not allowed menu”

Hi @mrjohn,
The ability to customize the list and much better feedback in these situations (and others) are part of our massive, in-progress odrive overhaul that we are trying to get out as fast as we can.

The .DS_Store files should be ignored in both directions, so you may be hitting a bug, or odrive may still be processing things so the .DS_Store files haven’t resolved out yet. If everything else is idle and you still see these listed, can send over a diagnostic from the odrive menu so I can take a look?

I’m not OK with the idea of odrive silently ignoring some files, especially folders I’ve created myself. What if I used some other service to upload to my cloud server, like Transmit? Transmit will upload these folders (~Old, etc.) but what will odrive do when it encounters them on the cloud server—delete them?

Hi @mrjohn,
The odrive desktop client will ignore them on both sides. If they are on the remote side you just won’t see them on the desktop. You can upload and download these files via the odrive web client, however, so they are still accessible that way.

We realize that this may be a problem for some folks, which is why we are plan to add customization in the future.

My apologies for the inconvenience.