I am running some code which creates a new directory (if it doesn’t exist yet), and writes out a series of small files into that directory. If I delete those files manually, then rerun the code, the deleted files come back (with their original names), and the new files are generated as conflicts.

I deleted everything, I waited over the weekend, output the files again, and the conflict didn’t appear.

I suspect you might not be emptying odrive’s trash (which passes the deletions on to the actual cloud service).

@Tenebrous is correct. It sounds like the trash is not being emptied prior to re-creating the files. 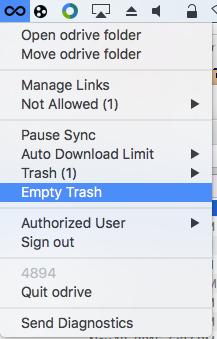 That being said, I don’t believe that a conflict should be generated in this case. It should just be an update to the existing file. I will take a look at this scenario.