Sync problem with Special Character on Onedrive for Business

Hi @nicolas1,
OneDrive has a lot of inconsistencies and funky rules for characters and path length.

Can you tell me what the character is?
Are these files showing up in “not allowed”? If so, can you also post a screenshot of the message displayed when you click on one of the items in the “not allowed” list? 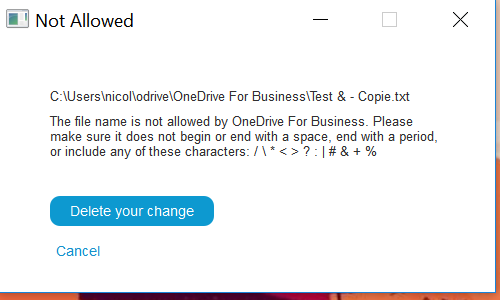 Thanks for the screenshot. I remembered there being a strange issue with OneDrive inconsistent behavior with the “&” character with their API and I dug up this post:

So after a little bit of head scratching I figured out that OD4B will not allow a "&" in the file name on upload. It does, however, allow you to rename a file to a name with "&". It will also allow a folder with a "&" in the name.

The bottom line is that you will need to remove the "&" characters if you want to upload to OD4B.

I believe this has more to do with a limitation of their API than an actually back-end limitation, but it is a pain nonetheless.

Thanks for looking into it

I’ll rename the files. Still weird that the native client can handle them… but I’ll deal with it

Yes. Definitely weird that they seem to allow it in most cases except for initial upload via their API…

to them on that.

yes. this is exactly what I have done in the end. first large upload with native client, and then disconnected it and moved to odrive

Microsoft updated OneDrive for Business API to support # and % in file names: https://dev.office.com/blogs/upcoming-changes-to-sharepoint-and-onedrive-for-business-apis-to-support-and-in-file-names

Hi @damjan,
We are not using the new API yet. It looks like MS hasn’t “officially” released this API yet. In any case, I will make sure the integration team is aware as they are going through all of our integrations right now.

I followed this link https://dev.office.com/blogs/upcoming-changes-to-sharepoint-and-onedrive-for-business-apis-to-support-and-in-file-names and made the changes to my Business OneDrive for my tenant and I can manually upload filenames or folder names with &, # and % characters. However, the latest odrive client on Windows 10 is still blocking these files and folders from being uploaded. This is very important to us as we plan to migrate some of the local file shares to the cloud and they contain these characters. Please make this feature available in odrive ASAP. Thanks.

Hi @Patrick.Ip,
This is not available in current versions, but will be part of our major release, which is in the works (not official date of release yet).

Long Path tool is best dude. Have a try.

Any update on this “major” release that should solve this issue? It’s been a while since this post.
I believe these characters are officially allowed by OneDrive for Business now and I’m still getting a lot of errors with odrive trying to push them up.

Hi @harrisondesign,
There was a test build I posted to the forum a week or so ago asking for feedback, but I didn’t get any. This allows for ‘+’ and ‘&’ characters to be attempted. Can you give it a shot and let me know how it goes?

Hi @onedrive, I took a look at your diagnostic and noticed that you have several things listed in “not allowed”, which makes it a little difficult to determine what else is going on. It looks like most of the items that are in not allowed are due to characters in the file names. We have a recent build which we haven’t officially released, but should soon, that removed the pre-check for the ‘+’ and ‘&’ characters. These used to cause problems with OneDrive for Business, but that behavior seems…

The others are still blocked (qa found some issues), but we can take another look once I get some feedback on this version.

This version appears to be pushing up the files with the & and + symbols. Hooray for that!

The biggest hiccup for me right now is the hash symbol (#). I’d love for you guys to sort that out.

I need to go through each “special” character and search for it in my sync folders, I guess, to see which one(s) are the most common, but I feel sure it’s the #.

Thank you and I’m looking forward to a future update that will allow them all.

Thanks for the feedback @harrisondesign!

Hello - Just following up to see if there’s been any progress on an update to allow the # symbol.
Thanks!

Hi @harrisondesign,
Can you try our latest version

Hi @Tony -
Apologies for the delay in getting back on this, but I’ve just installed the version you linked above and early indications are that it IS successfully syncing my files with the # character in the filename.
This is a really exciting development!