Some Word files not syncing - auto or manually 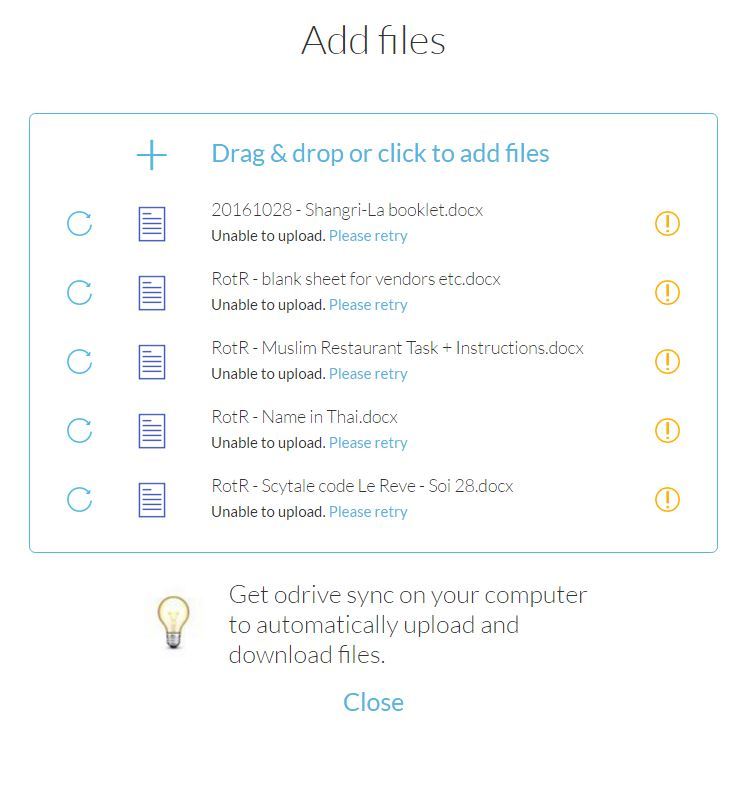 I use odrive (via Google Drive) to have the same desktop on all my PCs and laptops and that has worked fine for many months. Recently, some files stopped syncing. I tried manually to sync them, without success.

Most of the files sync on all three devices. Just a handful that won’t. Any suggestions why?

(All devices are using Win7)

Update: It now seems that any new Word files I am creating don’t sync. Older files are syncing as usual.

Hi @lesinthai,
Have you tried syncing with the desktop client? If so, is it also failing?

Yes, as mentioned, both the auto-sync (from the desktop client) and the manual sync (via the browser) have failed.

Hi,
Please send a diagnostic from the odrive tray menu and provide the me the path and name of a file that is failing. I can take a look.

Do you see anything in “not allowed” in the odrive tray menu? If so, what does the message say when you click on it?

I have sent the diagnostics, but there is no need to look through them, I think. Your second suggestion told me all: my Desktop is in a Google Drive folder, and that Drive('s bin) was full. I had checked the Drive several times and deleted all kinds of files from it, thinking I had more than enough space, but never gave a second thought to the fact that they might remain in the bin. So simple I could kick myself

Thanks for the help!

Ahh, yes. This has bitten me quite a few times too. Some service free up your space when items are moved to the trash. Google doesn’t do this, so your trash continues to count against your total storage.

We plan to improve our feedback here so its not tucked away in the tray menu and the user can respond to this scenario without digging.

Thanks for the update!