Hi there - really struggling with a team member with odrive - they are running a mac on el capitan - all our other macs have the little tick icons next to our folders on odrive - the mac in question does not have any ticks next to the folders - they can see files other members put into the shared fodlers on dropbox through odrive - but no other team members can see the files they are putting into shared folders on dropbox through odrive.

When right clicking the folders so see if we can manually sync we are told “no options available” - so something is not right here.

Let me know if you can help us out

Hi @ben,
If "no options is showing that means the Finder extensions are loaded, but they can’t see that the selected folder is an odrive folder. Can you send a screenshot of Finder when right-clicking on one of these folders as well as send a diagnostic from the odrive tray menu?

Hi Tony - I’ve attached a screenshot of what I can see and also send diagnostics - just sent that through. 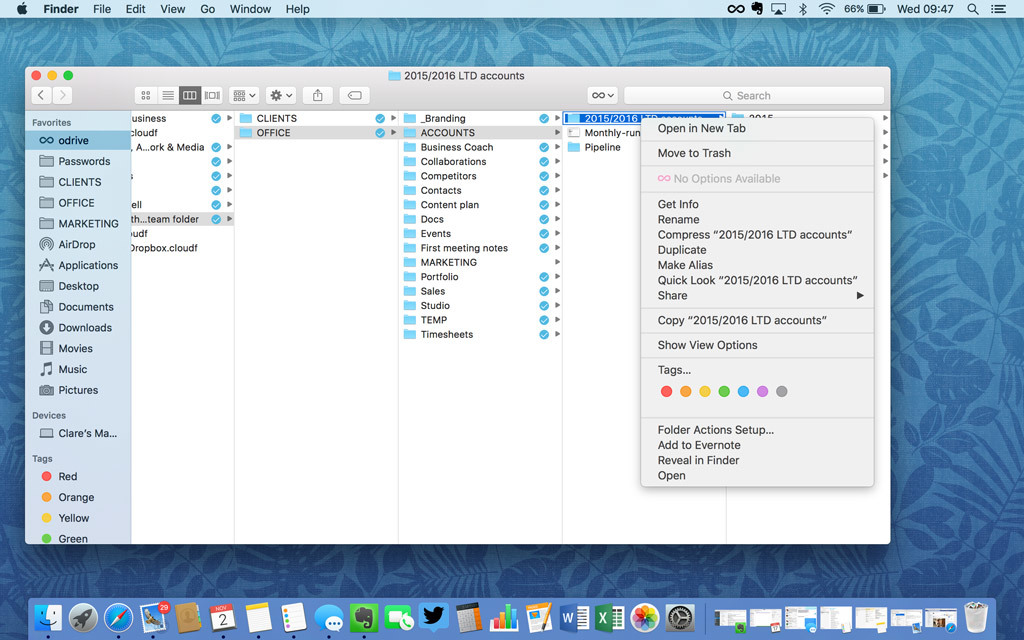 Hi @ben,
This one was pretty confusing. I went on a little bit of a wild goose chase because of the file names (more on that later), but it ended up being something else.

In this case there appears to be an issue, with Dropbox specifically, where they are not allowing renames of folders if the only thing changed is the letter case (lower to upper or vice versa). They spit back an exception and it causes the folder to be unable to sync after that.

On this system here, there are two folders suffering from this. You can see them in the screenshot you posted. MARKETING and ACCOUNTS were, I think, renamed from Marketing and Accounts and are now hitting this issue. This can be resolved by changing/adding/removing just one character in the names, or by changing it back to the original name. I am not positive what the original name was, but you should be able to see it via the Dropbox web client.

As for the original confusion, I am posting this here to provide some info on best practices for filenames and just for general posterity:
The folder in the image above is actually named “2015:2016 LTD accounts” on-disk. Finder doesn’t normally allow a “:” character (try creating a file/folder with one and it will give you an error) and it looks like it does a visual substitution from “:” to “/”.

Some interesting information about this in this thread here: http://stackoverflow.com/a/13316486

Since both : and / can be separators it is also why Apple suggests not using either in filenames, and we agree that avoiding these characters in file/folders names is best practice: https://support.apple.com/en-us/HT202808

Regardless, it doesn’t actually cause a sync problem, but it can be confusing because the name will end up with a “:” in the cloud instead of the “/” it appears with in Finder. This will also cause cross-platform issues, specifically with Windows.

Hi Tony - thank you so much - changing the case back to what it was originally sorted the problem totally - also thanks for the education about best practice with files names. So far all going to plan in our team with dropbox and odrive now. Thanks again. Ben

Great! Thanks for the follow-up!