Changes in web client not appearing in desktop client

I’m using odrive with dropbox and a folder that had been moved to the trash and then recovered in the desktop interface is no longer reflecting changes made in the web client.

I’ve refreshed the folder, synced and unsynced, uninstalled and reinstalled odrive, but nothing has had any effect.

Thank you for any suggestions.

Hi,
Can you show me a screenshot of the dropbox web client and the odrive web client, side-by-side to visualize the difference you are seeing? A discrepancy like this is definitely not expected.

On the left of the screenshot is the desktop client inside the “Share” folder. On the right is the web client (with some folder names redacted): 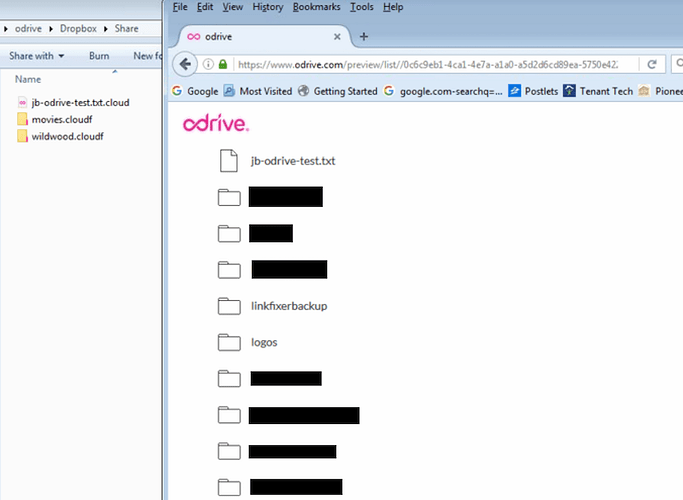 The movies and wildwood folders are both present in the web client, but the web client has a large number of folders that the desktop client doesn’t pick up.

Thanks for the screenshot.

After performing these tests, can you send a diagnostic from the odrive tray menu?

So now it appears to be working in both directions, which is great, but I am still missing dozens of folders on the desktop that appear in the web client.

Let me know if there are any steps you can recommend.

Hi,
I took a look and it appears that all of the missing items have a carriage return (\r) at the end of the name for some reason. This will prevent it from being displayed properly on the desktop.

I have seen this before with names that were created via a script that had previously been saved in DOS format (as opposed to UNIX) and then parsed. Were these items programmatically created?

In any case, if you rename the items you should see them show up.

The folders weren’t created by a script originally, but they were uploaded to Dropbox via a script running out of Cygwin on a Windows server.

Renaming the folders directly in Dropbox does seem to have done the trick - they are appearing in odrive now.

Thank you for the help!