I have a related question - sorry to jump this thread but I’ve just signed up for Odrive and am having a few issues which I haven’t been able to sort out despite searching both the user manual and online. I have signed up for a trial Amazon Drive account and am testing out Odrive with syncing my image library (including DNGs) to Amazon but so far no DNGs have synced, only JPGs. I assume Odrive is capable of syncing most file types, including RAW - am I assuming correctly? I haven’t even been able to figure out what file types Amazon Drive can and can’t sync, if either of you have any input on this I would greatly appreciate it. Cheers, Patrick

Hi @patrick1,
Are you using Amazon’s Prime Photos service, or a paid Amazon Drive account that allows all file types?

Do you see anything listed in the odrive menu under “waiting” or “not allowed”?

Have you tried uploading a DNG file via Amazon’s web client?

Hi Tony,
Thanks for your help.

Yes, I am using a paid Amazon Drive account.

As far as anything in the Odrive menu under “waiting”/“not allowed” I have 2 completely different scenarios on my 2 Macs. On my iMac yes I see many files under “waiting” and “not allowed”. And I can see the files that have synced in the finder sidebar “Odrive” folder/volume. On my Macbook Pro, Odrive appears to not be syncing anything and there is nothing showing in the Finder “Odrive” sidebar volume and there are no files showing under “waiting” / “not allowed”.
(The first test I did to see how Odrive sync worked was to try to sync a very large folder of data that was actually larger than my Amazon Drive storage limit and I think this is why there are literally thousands of images showing under “waiting” / “not allowed”. (I have only signed up for a 100GB Amazon Drive account for now until I am sure it and Odrive both offer the features I need).

In answer to your last question, yes I have successfully added a DNG file to Odrive via the web client, so at least I know both Odrive and Amazon Drive can and do sync DNG files.

I guess my next challenge is to get Odrive sync working on my Macbook Pro and then do another test by syncing a folder on my external drive to Odrive, making some changes to the source folder and making sure that Odrive syncs the changes. (My image library is on a Drobo 5d and it is Odrive’s ability to sync external storage that made it the obvious choice. Hopefully).

I have used various sync/backup services over the years (Google Drive/pCloud/Backblaze/Dropbox etc) but I have to confess I’m not finding the Odrive sync/set up completely intuitive,…but that’s probably just me. Maybe I need to drink more coffee…

Hi @patrick1,
Thanks for the additional information. If your Amazon Drive is out of space then it will definitely prevent odrive from syncing.
Have you since cleared up the space? If so, are you still having issues on the Macbook Pro?
Can you send a diagnostic from the odrive menu on the system(s) having issues so I can take a closer look?

Hi Tony, I appreciate that I probably need to upgrade my storage before syncing any large folders, but at the moment I am only trying to sync a relatively small amount of data that is much smaller than my Amazon Drive storage limit. However, I did try to sync a very large folder when I first started testing Odrive.

Is there anyway to see (and stop) exactly which files are syncing via either Odrive web client or the Mac app? (Before I upgrade my Amazon Drive storage I want to make sure I know exactly what Odrive is syncing/trying to sync.
Can Odrive sync deletions? Eg I have deleted one file in my test sync folder but the deletion has not been synced to Odrive several days later.

Sorry for all the newb questions and thanks for your help.
Cheers, Patrick

P.S. Currently on my iMac the Odrive Mac app appears to be doing nothing - ie the menu bar icon is not pink and “twirling”. But when I click on the icon it indicates it is syncing. Not sure what’s going on here…

Is there anyway to see (and stop) exactly which files are syncing via either Odrive web client or the Mac app? (Before I upgrade my Amazon Drive storage I want to make sure I know exactly what Odrive is syncing/trying to sync.

Sometimes odrive will just be scanning, in which case there isn’t really anything to stop. This can take a while depending on the size of the newly added structure. The odrive menu should tell you what is actively syncing, if anything is.

Can Odrive sync deletions? Eg I have deleted one file in my test sync folder but the deletion has not been synced to Odrive several days later.

odrive has a built-in trash feature to ensure that only the deletes you intended are sent to the cloud. When you make local deletes, you will want to use the “empty trash and sync all deletes” option under “Trash” in the odrive menu.

This will depend on how things are added. Can you give me an example of the steps? Generally, odrive will try to reconcile the items added, if they correspond to already-existing remote files, and not re-upload if it can determine that the exact same file already exists.

Were you able to submit a diagnostic from the odrive menu?

thanks for all your answers, they are super helpful.
Re syncing a sub-folder and then later syncing a master folder containing the already synced sub-folder, here is an example;

My image library is stored on a Drobo 5d and on the Drobo 5d there are several master folders, one of which is called “Working files” and one of which is called “Archive”. Within “Woprking Files” is a sub-folder (amongst others) called “DNGs to edit” and in that (amongst others) is a job folder called “2017_11_18_WED_Melissa_Ariana” which again has multiple sub-folders (containing DNGs, JPEGs, a few TIFFs and some Lightroom and other files). Once I finish editing all the images in the sub-folder “2017_11_18_WED_Melissa_Ariana” (and assuming it has already completed syncing in it’s current location via Odrive) I will then move it from “DNGs to edit” to “Archive” and there it will remain. I’m just wondering if Odrive will recognise the sub-folder in it’s new location in the Archive as something it has already synced, and therefore won’t need to repeat the sync/upload 100% taking up valuable time and bandwidth. Does that explanation make sense? Because my image library is large (6TB), backing it all up will take forever and some of it is still backed up on my old cloud service (pcloud) I would like to sync incrementally, ie start with the “DNGs to edit” sub-folder rather than syncing the whole image library in one go. But if it’s going to mean it’s going to take twice as long to sync everything then obviously that’s not the way to go. Or is there a way to do selective sync of sub-folders within a master folder?

Tony, one more question I’m hoping you can help me with. When I try to sync one of the folders on my Drobo 5d I get the attached error message. But the folder doesn’t show as synced anywhere in either the Mac or web Odrive apps. Any tips? Cheers, Patrick 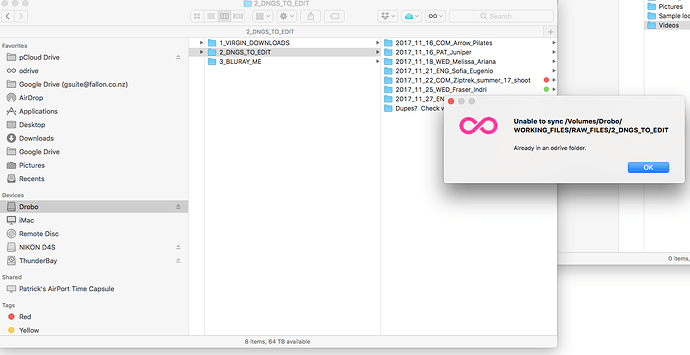 Hi @patrick1,
odrive does its best to recognize moves and “optimize” them, sometimes it can miss the optimization, however, and see the move as a delete and add. In the former case nothing will be re-uploaded. In the latter case files would be uploaded again. odrive has an easier time identifying a move if it is not really busy with other things. You could also try disabling automatic sync, then move, then re-enable automatic sync, which might assist with the optimization.

Hi @patrick1,
Is that folder inside a folder you have already synced to odrive? Can you send over a diagnostic (the option is in the odrive menu), so I can take a closer look?

Hi Tony, no the folder that is refusing to sync is not inside another folder already synced to Odrive (and I have also tried syncing the master folder (on the source hard drive) that contains the sub-folder I’m trying to sync and I got the same error. FYI I think I did try syncing the master folder previously in Odrive but there is no record of it syncing or ever having synced that I can see. It seems Odrive thinks it’s still syncing this folder from the previous attempt but there is no evidence I can see of it stil syncing or trying to sync now. I just hit “send diagnostics” from the Odrive Mac app menu bar option now.

Hi @patrick1,
It looks like /Volumes/Drobo/WORKING_FILES is set as a sync folder, but it is invalid. This may be because the folder it was pointing to was removed.

If you right->click on /Volumes/Drobo/WORKING_FILES and select “remove sync”, you should be able to sync the folder you want. You should also be able to see it listed in the odrive menu under “sync to odrive”.

Hi Tony, I tried that but there is no “unsync” option when I right click, only"sync to Odrive" (which results in the error message described before). Any other ideas?

I have set auto unsync to 1 day to see if that resolves the issue.

Hi @patrick1,
Yes, the WORKING_FILES folder is marked as invalid. You should remove sync on that folder, which will allow you to setup a new relationship with folders underneath it. Were you able to do that?

Yes I was. Thanks for all your help.

I’m still trying to get Odrive to sync the contents of my Drobo 5d - it contains my entire image library, about 6TB and syncing this to the cloud is the only reason I signed up for Odrive.

I have been reading the user guide online and have successfully synced a few folders and files as a test. (I didnt’ want to fork out a fortune for enough Amazon Drive storage until I knew the Odrive/Amazon combo wa actually going to do the job).

Re Syncing External Storage (https://docs.odrive.com/docs/manage-sync) the user guide says as long as the volume shows up as a folder on my Mac I can right click it and choose “sync to Odrive”.
However, although Odrive is connected and syncing some other files and folders, there is no “sync to Odvive” right click sub-menu option when I right click on either the Drobo folder/icon in my finder sidebar or on my desktop.
How do I enable the right click “sync to Odrive” option for my Drobo?

Or could this issue be because I am trying to sync my Drobo (around 6TB) to my Amazon Drive account which only has 1.1 TB of storage at the moment? (I don’t anticipate this is the case as I expect Odrive would at least try to sync and then give me an error message if it was simply a matter of insufficient storage).

Or is it likely to be a sync conflict?